Motion of System of Particles and Rigid Bodies (Physics)

The center of mass of a body is defined as a point where the entire mass of the body appears to be concentrated.

2. Find out the center of mass for the given geometrical structures. 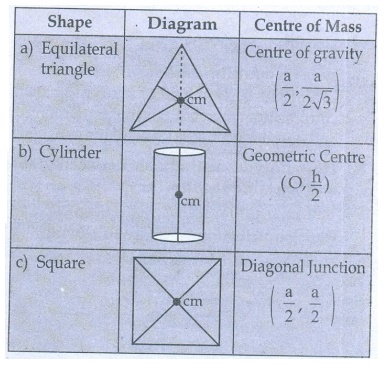 3. Define torque and mention its unit.

Torque is defined as the moment of the external applied force about a point or aixs of rotation.

4. What are the conditions in which force can not produce torque?

● Torque is zero when

● Torque is zero when

5. Give any two examples of torque in day-to-day life.

● Opening and closing of a door about the hinges

● Turning of a nut using a wrench.

6. What is the relation between torque and angular momentum?

A rigid body is said to be in mechanical equilibrium when both its linear momentum and angular momentum remains constant.

8. How do you distinguish between stable and unstable equilibrium? 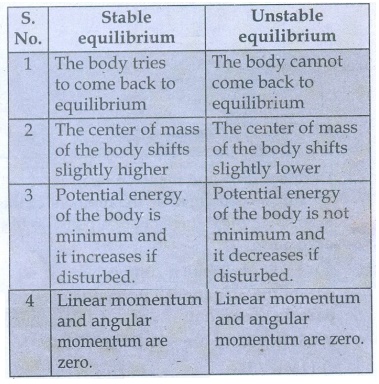 1. The body tries to come back to equilibrium

2. The center of mass of the body shifts slightly higher

3. Potential energy, of the body is minimum and it increases if disturbed.

1. The body cannot come back to equilibrium

2. The center of mass of the body shifts slightly lower

3. Potential energy of the body is not minimum and it decreases if disturbed.

A pair of forces which are equal in magnitude but opposite in direction and separated by a perpendicular distance so that their lines of action do not coincide that causes a turning effect is called a couple.

The centre of gravity of a body is the point of which the entire weight of the body acts irrespective of the position and orientation of the body.

12. Mention any two physical significance of moment of inertia

i) It is a measure of how difficult it is to rotate a particular body about a given axis.

ii) It is not an invariable quantity.

iii) It depends not only on the mass of the body, but also on the mass which is distributed around the axis of rotation.

13. What is radius of gyration?

It is the perpendicular distance from the axis of rotation to an equivalent point mass, which would have the same mass as well as the same moment of inertia of the object.

When no external torque acts on the body the net angular momentum of a rotating rigid body remains constant.

15. What are the rotational equivalents for the physical quantities, (i) mass and (ii) force?

i) Mass equivalent for moment of inertia.

16. What is the condition for pure rolling?

● As the point of contact is at momentary rest.

17. What is the difference between sliding and slipping?

3. This happens when sudden break is applied in a moving vehicle

4. It is also referred as forward clipping

3. This happens when we suddenly start the vehicle from rest.

4. It is sometimes referred as backward slipping.