The rolling motion is the most commonly observed motion in daily life.

The rolling motion is the most commonly observed motion in daily life. The motion of wheel is an example of rolling motion. Round objects like ring, disc, sphere etc. are most suitable for rolling .

We will now see how these translational and rotational motions are related in rolling. If the radius of the rolling object is R, in one full rotation, the center of mass is displaced by 2πR (its circumference). One would agree that not only the center of mass, but all the points on the disc are displaced by the same 2πR after one full rotation. The only difference is that the center of mass takes a straight path; but, all the other points undergo a path which has a combination of the translational and rotational motion. Especially the point on the edge undergoes a path of a cycloid as shown in the Figure 5.31.

We shall now give importance to the point of contact. In pure rolling, the point of the rolling object which comes in contact with the surface is at momentary rest. This is the case with every point that is on the edge of the rolling object. As the rolling proceeds, all the points on the edge, one by one come in contact with the surface; remain at momentary rest at the time of contact and then take the path of the cycloid as already mentioned.

Hence, we can consider the pure rolling in two different ways.

For the topmost point, the two velocities vTRANS and vROT are equal in magnitude and in the same direction (to the right). Thus, the resultant velocity v is the sum of these two velocities, v = vTRANS + v ROT. In other form, v = 2 vCM as shown in Figure 5.34. 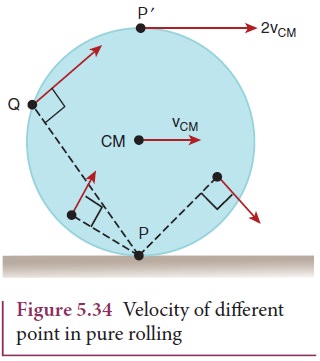 When the round object moves, it always tends to roll on any surface which has a coefficient of friction any value greater than zero (µ > 0). The friction that enabling the rolling motion is called rolling friction. In pure rolling, there is no relative motion of the point of contact with the surface. When the rolling object speeds up or slows down, it must accelerate or decelerate respectively. If this suddenly happens it makes the rolling object to slip or slide.

Sliding  is  the  case  when  vCM > Rω (or vTRANS > vROT). The translation is more than the rotation. This kind of motion happens when sudden break is applied in a moving vehicles, or when the vehicle enters into a slippery road. In this case, the point of contact has more of vTRANS than vROT. Hence, it has a resultant velocity v in the forward direction as shown in Figure 5.35. The kinetic frictional force (fk) opposes the relative motion. Hence, it acts in the opposite direction of the relative velocity. This frictional force reduces the translational velocity and increases the rotational velocity till they become equal and the object sets on pure rolling. Sliding is also referred as forward slipping. 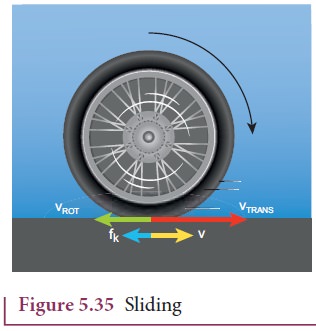 Slipping  is  the  case  when  vCM < Rω (or vTRANS < vROT). The rotation is more than the translation. This kind of motion happens when we suddenly start the vehicle from rest or the vehicle is stuck in mud. In this case, the point of contact has more of vROT than vTRANS. It has a resultant velocity v in the backward direction as shown in Figure 5.36. The kinetic frictional force (fk) opposes the relative motion. Hence it acts in the opposite direction of the relative velocity. This frictional force reduces the rotational velocity and increases the translational velocity till they become equal and the object sets pure rolling. Slipping is sometimes empahasised as backward slipping. 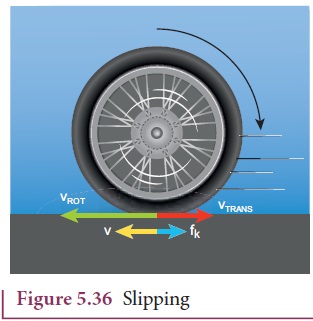 With center of mass as reference:

The moment of inertia (ICM) of a rolling object about the center of mass is, 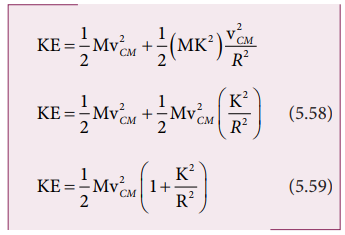 As the two equations 5.59 and 5.60 are the same, it is once again confirmed that the pure rolling problems could be solved by considering the motion as any one of the following two cases.

Let us assume a round object of mass m and radius R is rolling down an inclined plane without slipping as shown in Figure 5.37. There are two forces acting on the object along the inclined plane. One is the component of gravitational force (mg sinθ) and the other is the static frictional force (f). The other component of gravitation force (mg cosθ) is cancelled by the normal force (N) exerted by the plane. As the motion is happening along the incline, we shall write the equation for motion from the free body diagram (FBP) of the object. 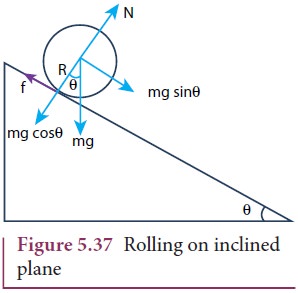 For translational motion, mg sinθ is the supporting force and f is the opposing force,

For rotational motion, let us take the torque with respect to the center of the object. Then mg sinθ cannot cause torque as it passes through it but the frictional force f can set torque of Rf. 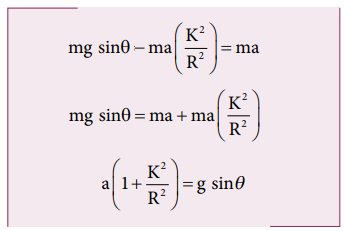 After rewriting it for acceleration, we get,

We can also find the expression for final velocity of the rolling object by using third equation of motion for the inclined plane. v 2 = u2 + 2as. If the body starts rolling from rest, u = 0. When h is the vertical height of the incline, the length of the incline s is, s = h/sinθ 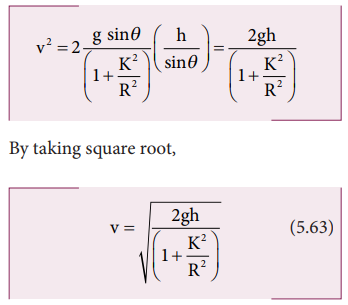 The time taken for rolling down the incline could also be written from first equation of motion as, v = u + at. For the object which starts rolling from rest, u = 0. Then, 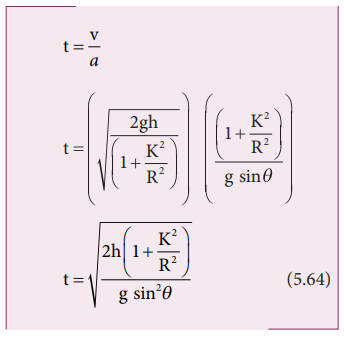 The equation suggests that for a given incline, the object with the least value of radius of gyration K will reach the bottom of the incline first.

A rolling wheel has velocity of its center of mass as 5 m s-1. If its radius is 1.5 m and angular velocity is 3 rad s-1, then check whether it is in pure rolling or not.

The expression for total kinetic energy in pure rolling is, 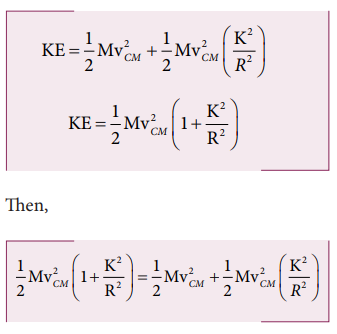 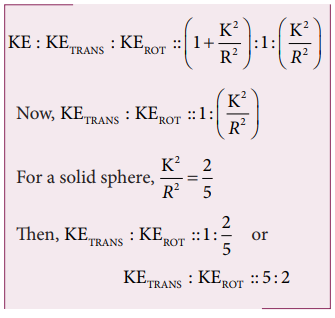 Four round objects namely a ring, a disc, a hollow sphere and a solid sphere with same radius R start to roll down an incline at the same time. Find out which object will reach the bottom first.

The one with least value of radius of gyration K will take the shortest time to reach the bottom of the inclined plane. The order of objects reaching the bottom is first, solid sphere; second, disc; third, hollow sphere and last, ring.