The magnitude of angular momentum could be written as,

where, θ is the angle between

is perpendicular to the plane containing

. As we have written in the case of torque, here also we can associate sin θ with either

Let us consider a rigid body rotating about a fixed axis. A point mass m in the body will execute a circular motion about the fixed axis as shown in Figure 5.12. 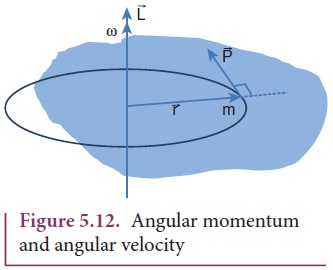 The point mass m is at a distance r from the axis of rotation. Its linear momentum at any instant is tangential to the circular path. Then the angular momentum

. Hence, it is directed along the axis of rotation. The angle θ between

in this case is 90o. The magnitude of the angular momentum L could be written as,

The directions of L and ω are along the axis of rotation. The above expression can be written in the vector notation as,

The study about moment of inertia (I) is reserved for Section 5.4.

We can further write the expression for torque as,

Where, ω is angular velocity and a is angular acceleration. We can also write equation 5.26 as,

The above expression says that an external torque on a rigid body fixed to an axis produces rate of change of angular momentum in the body about that axis.

This is the Newton’s second law in rotational motion as it is in the form of F = dp/dt which holds good for translational motion.

From the above expression we could conclude that in the absence of external torque, the angular momentum of the rigid body or system of particles is conserved.

The above expression is known as law of conservation of angular momentum. We will learn about this law further in section 5.5. 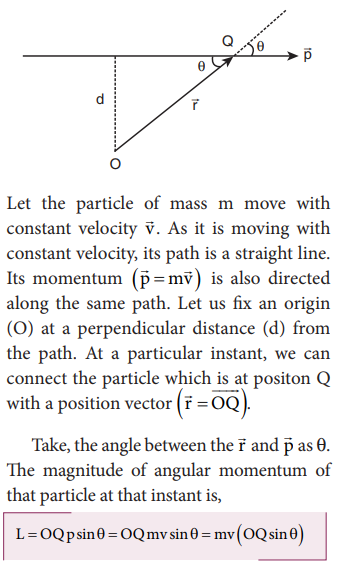