It implies that if temperature of the body increases, maximal intensity wavelength ( λm ) shifts towards lower wavelength (higher frequency) of electromagnetic spectrum. It is shown in Figure 8.13 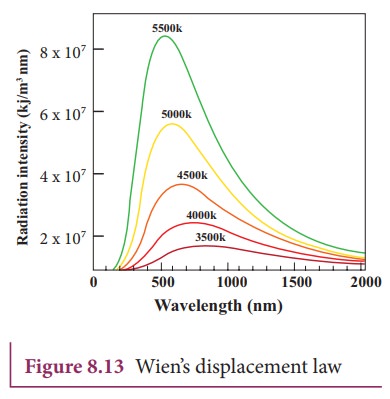 From the graph it is clear that the peak of the wavelengths is inversely proportional to temperature. The curve is known as ‘black body radiation curve’.

Why our eye is sensitive to only visible wavelength (in the range 400 nm to 700nm)?

The Sun is approximately taken as a black body. Since any object above 0 K will emit radiation, Sun also emits radiation. Its surface temperature is about 5700 K. By substituting this value in the equation (8.12),

It is the wavelength at which maximum intensity is 508nm. Since the Sun’s temperature is around 5700K, the spectrum of radiations emitted by Sun lie between 400 nm to 700 nm which is the visible part of the spectrum. It is shown in Figure 8.14

The humans evolved under the Sun by receiving its radiations. The human eye is sensitive only in the visible not in infrared or X-ray ranges in the spectrum.

Suppose if humans had evolved in a planet near the star Sirius (9940K), then they would have had the ability to see the Ultraviolet rays!

λmax T = constant for both object A and B 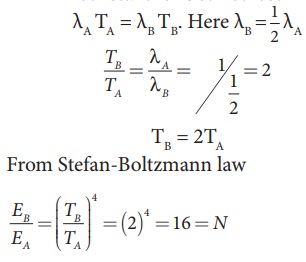 Object B has emitted at lower wavelength compared to A. So the object B would have emitted more energetic radiation than A.