The presence of atmosphere in the earth plays very important role in human lives.

The greenhouse gases are mainly CO2, water vapour, Ne, He, NO2, CH4, Xe, Kr, ozone and NH3. Except CO2 and water vapor, all others are present only in very small amount in the atmosphere. The radiation from the Sun is mainly in the visible region of the spectrum. The earth absorbs these radiations and reradiate in the infrared region. Carbon dioxide and water Vapour are good absorbers of infrared radiation since they have more vibrational degree of freedom compared to nitrogen and oxygen (you will learn in unit 9) which keeps earth warmer as shown in Figure.

The amount of CO 2 present in the atmosphere is increased from 20% to 40% due to human activities since 1900s. The major emission of CO2 comes from burning of fossil fuels. The increase in automobile usage worldwide causes this damage. Due to this increase in the CO2 content in the atmosphere, the average temperature of the earth increases by 1°C. This effect is called global warming. It has serious influence and alarming effect on ice glaciers on Arctic and Antarctic regions. In addition, the CO2 content is also increasing in ocean which is very dangerous to species in the oceans.

In addition to CO2, another very important greenhouse gas is Chloro flouro carbon(CFC) which is used as coolant in refrigerators worldwide. In the human made greenhouse gases CO2 is 55%, CFCs are 24%. Nitrogen oxide is 6% and methane is 15%. CFCs also has made huge damage to ozone layer. 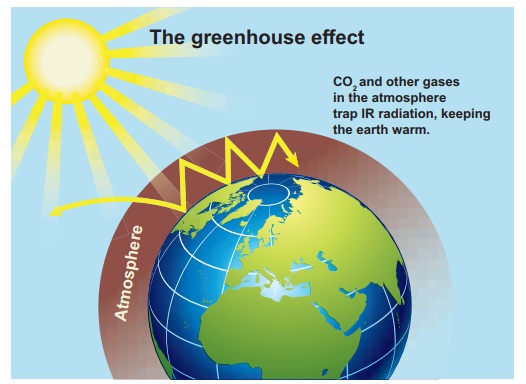