There are three modes of heat transfer: Conduction, Convection and Radiation.

As we have seen already heat is a energy in transit which is transferred from one body to another body due to temperature difference. There are three modes of heat transfer: Conduction, Convection and Radiation.

Conduction is the process of direct transfer of heat through matter due to temperature difference. When two objects are in direct contact with one another, heat will be transferred from the hotter object to the colder one. The objects which allow heat to travel easily through them are called conductors.

Thermal conductivity is the ability to conduct heat.

The quantity of heat transferred through a unit length of a material in a direction normal to unit surface area due to a unit temperature difference under steady state conditions is known as thermal conductivity of a material. 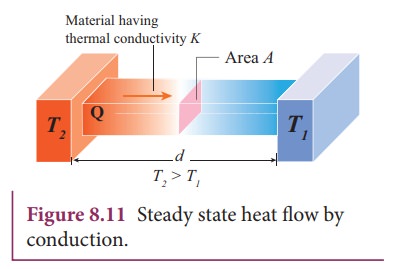 Where, K is known as the coefficient of thermal conductivity.

(Not to be confused with Kelvin represented by upper case K)

Convection is the process in which heat transfer is by actual movement of molecules in fluids such as liquids and gases. In convection, molecules move freely from one place to another. It happens naturally or forcefully.

Boiling water in a cooking pot is an example of convection. Water at the bottom of the pot receives more heat. Due to heating, the water expands and the density of water decreases at the bottom. Due to this decrease in density, molecules rise to the top. At the same time the molecules at the top receive less heat and become denser and come to the bottom of the pot. This process goes on continuously. The back and forth movement of molecules is called convection current.

To keep the room warm, we use room heater. The air molecules near the heater will heat up and expand. As they expand, the density of air molecules will decrease and rise up while the higher density cold air will come down. This circulation of air molecules is called convection current.

Radiation is a form of energy transfer from one body to another by electromagnetic waves.

1. Solar energy from the Sun.