1. ‘An object contains more heat’- is it a right statement? If not why?

● Once the heating process is stopped we cannot use the word heat. Heat is the energy in transit but not energy stored in the body. An object has more heat is wrong, instead object is hot will be appropriate.

2. Obtain an ideal gas law from Boyle’s and Charles’ law.

● According to Charle's law V α T. By combining these two equations we have PV = CT. Here C is positive constant.

● Constant C is k times the number of particles N.

One mole of any substance is the amount of that substance which contains Avogadro number (NA) of particles (such as stoms or molecules).

4. Define specific heat capacity and give its unit.

● Here C is known as molar specific heat capacity of a substance and μ is number of moles in the substance.

6. What is a thermal expansion?

● Termal expansion is the tendency of matter to change in shape, area and volume due to a change in temperature.

● All three states of matter (solid, liqid and gas) expand when heated. When a solid is heated, its atoms vibrate with higher amplitude about their fixed points. The relative change in the size of solids is small.

7. Give the expressions for linear, area and volume thermal expansions.

Where αA = coefficient of area expansion.

Where, αV = coefficient of volume expansion;

Unit of coefficient of linear, area and volumetric expansion of solids is C−1 or K−1.

● Latent heat capacity of a substance is defined as the amount of heat energy required to change the state of a unit mass of the material.

● Stefan Boltzmann law states that, the total amount of heat radiated per second per unit area of a black body is directly proportional to the fourth power of its absolute temperature.

● When's law states that, the wavelength of maximum intensity of emission of a black body radiation is inversely proportional to the absolute temperature of the black body.

Where, b is known as Wien's constant.

11. Define thermal conductivity. Give its unit.

● The quantity of heat transferred through a unit length of a material in a direction normal to unit surface area due to a unit temperature difference under steady state conditions is known as thermal conductivity of a material.

A black body is an object that absorbs all electromagnetic radiations, it is a perfect absorber and radiator of energy with no reflecting power.

13. What is a thermodynamic system? Give examples.

Examples: A thermodynamic system can be liquid, solid, gas and radiation. Bucket of water, Air molecules in the room, Human body, Fish in the sea.

14. What are the different types of thermodynamic systems?

Open system: It can exchange both matter and energy with the environment.

Closed system: It can exchange energy, but not matter with the environment.

Isolated system: It can exchange neither energy nor matter with he environment.

15. What is meant by ‘thermal equilibrium’?

Two systems are said to be in thermal equilibrium with each other if they are at the same temperature, which will not change with time.

16. What is mean by state variable? Give example.

The values of these variables completely describe the equilibrium state of a thermodynamic system.

17. What are intensive and extensive variables? Give examples.

Intensive variable depends on the size or mass of the system.

Intensive variables do not depend on the size or mass of the system.

18. What is an equation of state? Give an example.

● The equation which connects the state variables in a specific manner is called equation of state.

● The air molecules in the room truly obey vander Walls equation of state. But at room temperature with low density we can approximate it into an ideal gas.

20. Define the internal energy of the system.

● The internal energy of a thermodynamic system is the sum of kinetic and potential energies of all the molecules of the systern with respect to the center of mass of the system.

21. Are internal energy and heat energy the same? Explain.

● No, but they are related. If heat energy is added to substance, its internal energy will increase. Internal energy is the amount of kinetic and potential energy possessed by particles in a substation.

● Heat energy concerns only transfer of internal energy from the hotter to a colder body.

The amount of heat required at a pressure of standard atmosphere to rise the temperature of 1g of water 1°C.

● Yes, In his experiment, two masses were attached with a rope and a paddle wheel. When these masses fall through a distance h due to gravity both the masses lose potential energy equal to 2mgh.

When these masses fall, the paddle wheel turns.

● Due to the turning of wheel inside water, frictional force comes in between the water and the paddle wheel.

● This causes a rise in temperature of the water. This implies that gravitational potential energy is converted to internal energy of water.

● The temperature of water increases due to the work done by the masses.

24. State the first law of thermodynamics.

Change in internal energy (∆U) or the system is equal to heat supplied to the system (Q) minus the work done by the system (W) on the surroundings.

25. Can we measure the temperature of the object by touching it?

● No. When we stand bare feet with one foot on the carpet and the other on the tiled floor.

● Our foot on tiled floor feels cooler than the foot on the carpet even though both the tiled floor and carpet are at the same room temperature.

● It is because the tiled floor transfer the heat energy to our skin at higher rate than the carpet.

● So the skin is not measuring the actual temperature of the object instead it measures the rate of heat energy transfer. But if we place a thermometer on the tiled floor or carpet it will show the same temperature.

Work done on the system - W is negative

Work done by the system - W is positive

● A quasi-static process is an infinitely slow process in which the system changes its variables (P.V.T)

● So slowly such that it remains in thermal, mechanical and chemical euilibrium with its surroundings throughout.

By this infinite slow variation, the system is always almost close to equilibrium state.

28. Give the expression for work done by the gas.

● Some of this energy is lost due to expansion.

31. Give the equation of state for an isothermal process.

The equation of state for isothermal process is given by PV = Constant.

32. Give an expression for work done in an isothermal process.

33. Express the change in internal energy in terms of molar specific heat capacity.

If the limit ∆T goes to zero, we can write

Since the temperature and internal energy are state variable, the above relation holds true for any process.

34. Apply first law for (a) an isothermal (b) adiabatic (c) isobaric processes.

∆U - change in internal energy.

35. Give the equation of state for an adiabatic process.

The equation of state for an adiabatic process is given by PVγ = Constant. Here γ is called adiabatic exponent (γ = Cp / Cv )

36. Give an equation state for an isochoric process.

The equation of state for an isochoric process is given by P = (μR/v)T,

37. If the piston of a container is pushed fast inward. Will the ideal gas equation be valid in the intermediate stage? If not, why?

Decrease in volume leading to increase in temperature, work is done on the gas. Ideal gas equation PV = RT. When piston be pushed further the parameters V and R are taken as constant. The equation becomes P = kT. i.e. P ∝ T.

38. Draw the PV diagram for 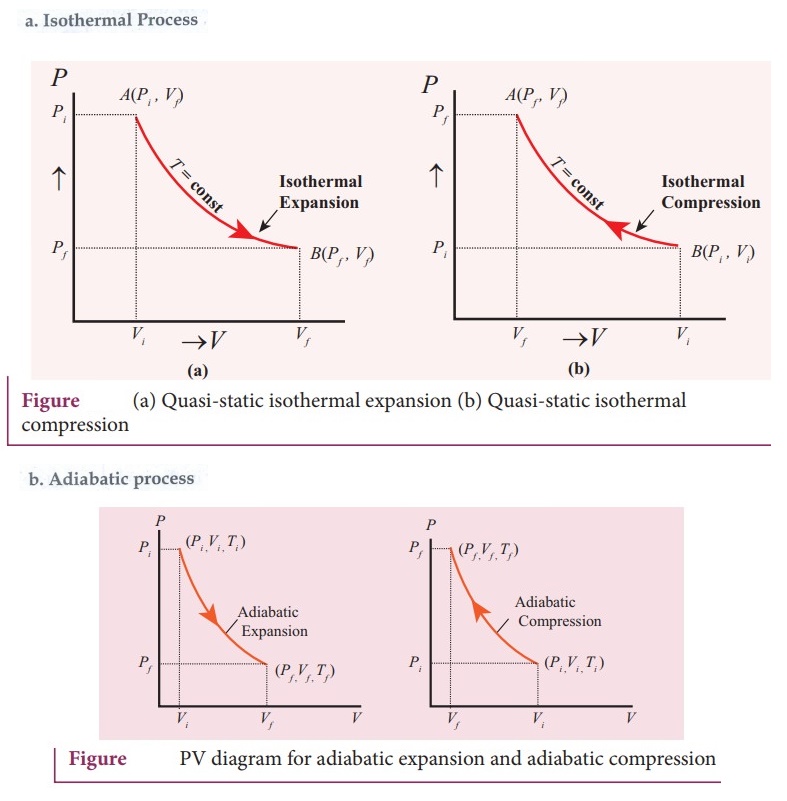 This is a thermodynamic process in which the thermodynamic system returns to its initial state after undergoing a series of changes. Since the system comes back to the initial state, the change in the internal energy is zero. In cyclic process, heat can flow in to system and heat flow out of the system.

40. What is meant by a reversible and irreversible processes?

● A thermodynamic process can be considered reversible only if it possible to retrace the path in the opposite direction in such a way that the system and surroundings pass through the same states as in the initial, direct process.

● Irreversible process cannot be plotted in a PV diagram, because these processes cannot have unique values of pressure, temperature at every stage of the process.

41. State Clausius form of the second law of thermodynamics

"Heat always flows from hotter object to colder object spontaneously". This is known as the Clausius form of second law of thermodynamics.

Kelvin-Planck statement: It is impossible to construct a heat engine that operates in a cycle, whose sole effect is to convert the heat completely into work. This implies that no heat engine in the universe can have 100% efficiency.

Heat engine is a device which takes heat as input and converts this heat in to work by undergoing a cyclic process.

44. What are processes involves in a Carnot engine? 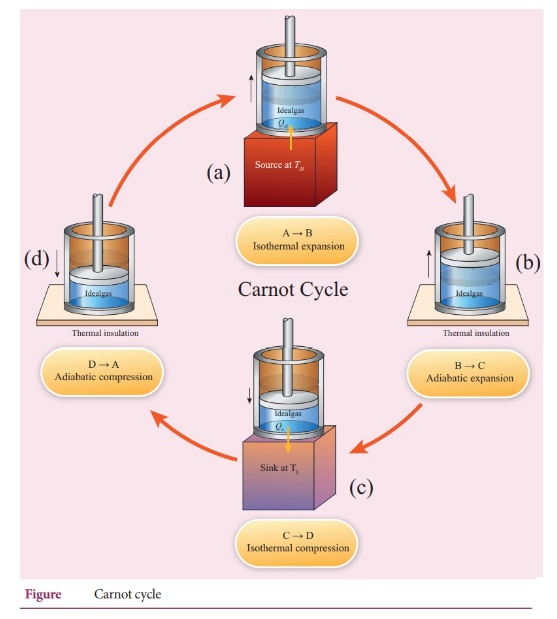 There are four servisible process in involed in carnot's engine. There are

Step A to B: Quasi-static isothermal expansion .

● No. In a cyclic process, the complete heat energy is not completely converted to work.

● The whole heat cannot be converted into work, as it will violate second law of thermodynamics.

46. State the second law of thermodynamics in terms of entropy.

● Entropy determines the direction in which natural process should occur.

47. Why does heat flow from a hot object to a cold object?

Because entropy increases when heat flows from hot object to cold object.

48. Define the coefficient of performance.

COP is a measure of the efficiency of a refrigerator, it is defined as the ration of heat extracted from the cold body (sink) to the external work done by the compressor