This is a process in which no heat flows into or out of the system (Q=0).

This is a process in which no heat flows into or out of the system (Q=0). But the gas can expand by spending its internal energy or gas can be compressed through some external work. So the pressure, volume and temperature of the system may change in an adiabatic process.

For an adiabatic process, the first law becomes ∆U = W.

The adiabatic process can be achieved by the following methods

(ii) If the process occurs so quickly that there is no time to exchange heat with surroundings even though there is no thermal insulation. A few examples are shown in Figure 8.29. 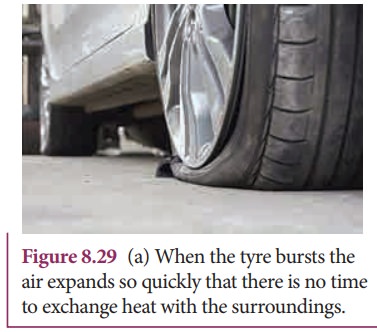 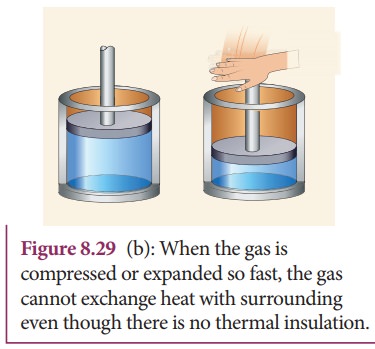 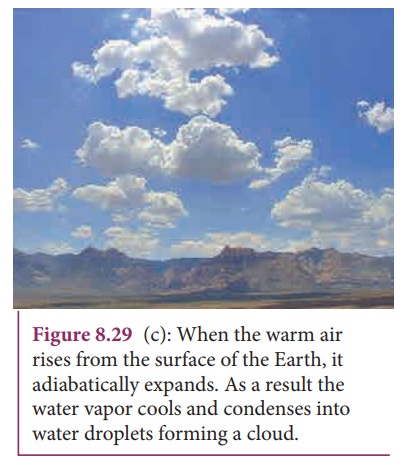 The equation of state for an adiabatic process is given by

Here γ is called adiabatic exponent (γ = Cp/Cv) which depends on the nature of the gas.

Note here that is another constant. So it can be written as 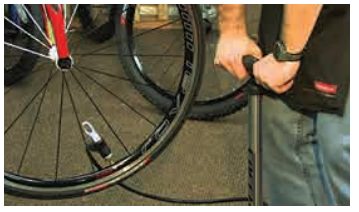 We often have the experience of pumping air into bicycle tyre using hand pump. Consider the air inside the pump as a thermodynamic system having volume V at atmospheric pressure and room temperature, 27°C. Assume that the nozzle of the tyre is blocked and you push the pump to a volume 1/4 of V. Calculate the final temperature of air in the pump? (For air , since the nozzle is blocked air will not flow into tyre and it can be treated as an adiabatic compression).

Here, the process is adiabatic compression. The volume is given and temperature is to be found. we can use the equation (8.38 ) 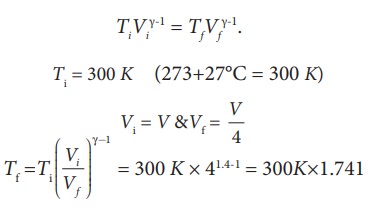 This temperature is higher than the boiling point of water. So it is very dangerous to touch the nozzle of blocked pump when you pump air.

Work done in an adiabatic process:

Consider μ moles of an ideal gas enclosed in a cylinder having perfectly non conducting walls and base. A frictionless and insulating piston of cross sectional area A is fitted in the cylinder as shown in Figure 8.31. 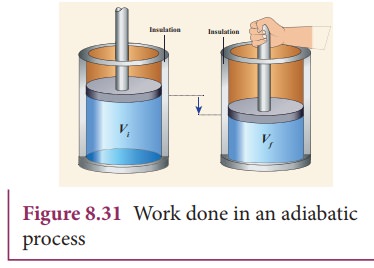 Let W be the work done when the system goes from the initial state (Pi,Vi,Ti) to the final state (Pf,Vf,Tf) adiabatically.

By assuming that the adiabatic process occurs quasi-statically, at every stage the ideal gas law is valid. Under this condition, the adiabatic equation of state is PVγ=constant (or) 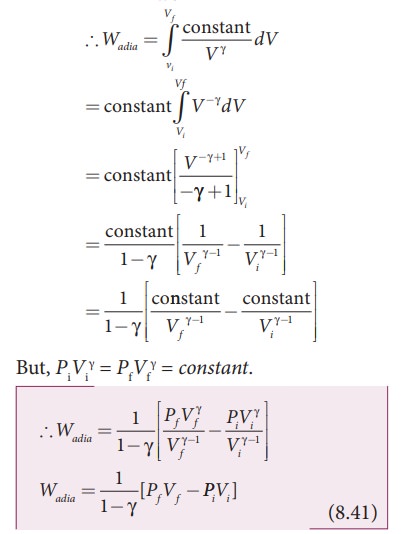 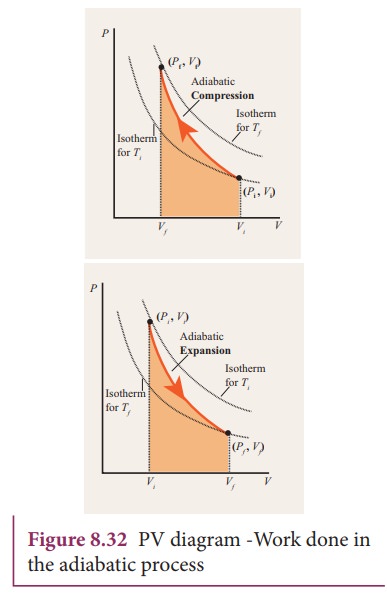