Thermodynamics is a branch of physics which describes the laws governing the process of conversion of work into heat and conversion of heat into work.

In the previous sections we have studied about the heat, temperature and thermal properties of matter. Thermodynamics is  a branch of physics which describes the laws governing the process of conversion of work into heat and conversion of heat into work. The laws of thermodynamics are formulated over three centuries of experimental works of Boyle, Charles, Bernoulli, Joule, Clausius, Kelvin, Carnot and Helmholtz. In our day to day life, the functioning of everything around us and even our body is governed by the laws of thermodynamics. Therefore thermodynamics is one of the essential branches of physics.

A thermodynamic system is a finite part of the universe. It is a collection of large number of particles (atoms and molecules) specified by certain parameters called pressure (P), Volume (V) and Temperature (T). The remaining part of the universe is called surrounding. Both are separated by a boundary. It is shown in Figure 8.15 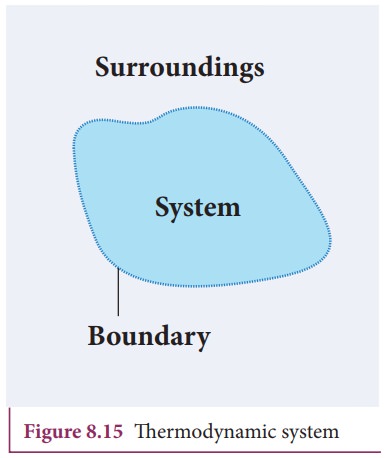 A thermodynamic system can be liquid, solid, gas and radiation. 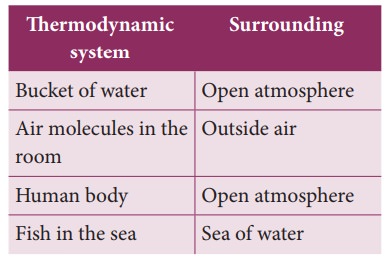 We can classify thermodynamics system into three types: It is given in Figure 8.16 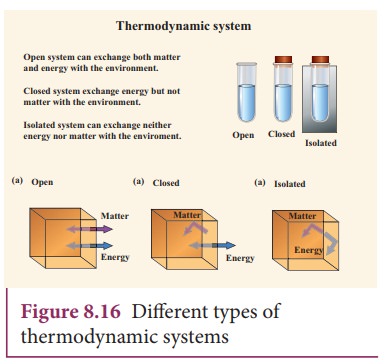 Two systems are said to be in thermal equilibrium with each other if they are at the same temperature, which will not change with time.

Consider a gas container with piston as shown in Figure 8.17. When some mass is placed on the piston, it will move downward due to downward gravitational force and after certain humps and jumps the piston will come to rest at a new position. When the downward gravitational force given by the piston is balanced by the upward force exerted by the gas, the system is said to be in mechanical equilibrium. A system is said to be in mechanical equilibrium if no unbalanced force acts on the thermo dynamic system or on the surrounding by thermodynamic system. 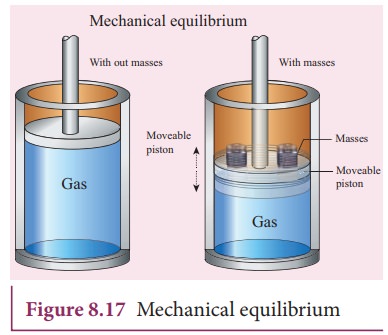 If there is no net chemical reaction between two thermodynamic systems in contact with each other then it is said to be in chemical equilibrium.

The values of these variables completely describe the equilibrium state of a thermodynamic system. Heat and work are not state variables rather they are process variables.

There are two types of thermodynamic variables: Extensive and Intensive Extensive variable depends on the size or mass of the system.

Intensive variables do not depend on the size or mass of the system.

An ideal gas obeys the equation PV = NkT at thermodynamic equilibrium. Since all four macroscopic variables (P,V,T and N) are connected by this equation, we cannot change one variable alone. For example, if we push the piston of a gas container, the volume of the gas will decrease but pressure will increase or if heat is supplied to the gas, its temperature will increase, pressure and volume of the gas may also increase.