In motor bikes and cars there are engines which take in petrol or diesel as input, and do work by rotating wheels.

In the modern technological world, the role of automobile engines plays a vital role in for transportation. In motor bikes and cars there are engines which take in petrol or diesel as input, and do work by rotating wheels. Most of these automobile engines have efficiency not greater than 40%. The second law of thermodynamics puts a fundamental restriction on efficiency of engines. Therefore understanding heat engines is very important.

It is defined as a thermodynamic system which has very large heat capacity. By taking in heat from reservoir or giving heat to reservoir, the reservoir’s temperature does not change.

Example: Pouring a tumbler of hot water in to lake will not increase the temperature of the lake. Here the lake can be treated as a reservoir.

When a hot cup of coffee attains equilibrium with the open atmosphere, the temperature of the atmosphere will not appreciably change. The atmosphere can be taken as a reservoir.

We can define heat engine as follows.

Heat engine is a device which takes heat as input and converts this heat in to work by undergoing a cyclic process.

A heat engine has three parts:

A Schematic diagram for heat engine is given below in the figure 8.42. 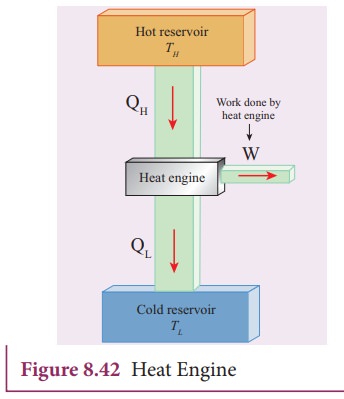 1. Hot reservoir (or) Source: It supplies heat to the engine. It is always maintained at a high temperature TH

2. Working substance: It is a substance like gas or water, which converts the heat supplied into work.

A simple example of a heat engine is a steam engine. In olden days steam engines were used to drive trains. The working substance in these is water which absorbs heat from the burning of coal. The heat converts the water into steam. This steam is does work by rotating the wheels of the train, thus making the train move.

3. Cold reservoir (or) Sink: The heat engine ejects some amount of heat (QL) in to cold reservoir after it doing work. It is always maintained at a low temperature TL.

The efficiency of the heat engine is defined as the ratio of the work done (out put) to the heat absorbed (input) in one cylic process.

Let the working substance absorb heat QH units from the source and reject QL units to the sink after doing work W units, as shown in the Figure 8.43. 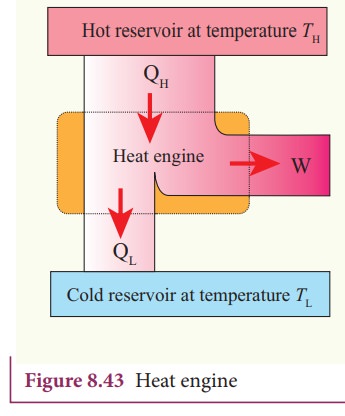 Then the efficiency of heat engine

Note here that QH, QL and W all are taken as positive, a sign convention followed in this expression.

Since QL < QH, the efficiency (η) always less than 1. This implies that heat absorbed is not completely converted into work. The second law of thermodynamics placed fundamental restrictions on converting heat completely into work.

We can state the heat engine statement of second law of thermodynamics. This is also called Kelvin-Planck’s statement.

It is impossible to construct a heat engine that operates in a cycle, whose sole eﬀect is to convert the heat completely into work. This implies that no heat engine in the universe can have 100% efficiency.

During a cyclic process, a heat engine absorbs 500 J of heat from a hot reservoir, does work and ejects an amount of heat 300 J into the surroundings (cold reservoir). Calculate the efficiency of the heat engine?

The efficiency of heat engine is given by 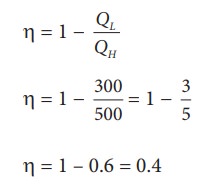 The heat engine has 40% efficiency, implying that this heat engine converts only 40% of the input heat into work.

In the previous section we have seen that the heat engine cannot have 100% efficiency. What is the maximum possible efficiency can a heat engine have?. In the year 1824 a young French engineer Sadi Carnot proved that a certain reversible engine operated in cycle between hot and cold reservoir can have maximum efficiency. This engine is called Carnot engine.

The carnot engine has four parts which are given below.

i. Source: It is the source of heat maintained at constant high temperature TH. Any amount of heat can be extracted from it, without changing its temperature.

ii. Sink: It is a cold body maintained at a constant low temperature TL. It can absorb any amount of heat.

iii. Insulating stand: It is made of perfectly non-conducting material. Heat is not conducted through this stand.

The four parts are shown in the following Figure 8.44 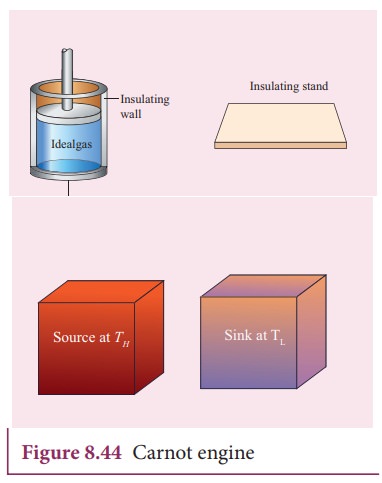 The working substance is subjected to four successive reversible processes forming what is called Carnot’s cycle.

Let the initial pressure, volume of the working substance be P1,V1.

The cylinder is placed on the source. The heat (QH) flows from source to the working substance (ideal gas) through the bottom of the cylinder. Since the process is isothermal, the internal energy of the working substance will not change. The input heat increases the volume of the gas. The piston is allowed to move out very slowly(quasi-statically). It is shown in the figure 8.47(a).

W1 is the work done by the gas in expanding from volume V1 to volume V2 with a decrease of pressure from P1 to P2. This is represented by the P-V diagram along the path AB as shown in the Figure 8.45. 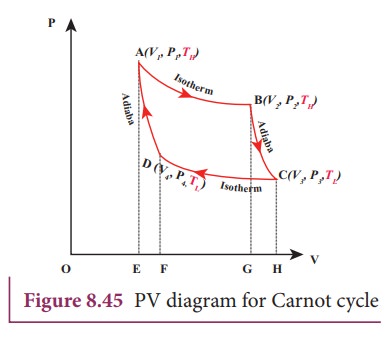 Since the process occurs quasi-statically, the gas is in equilibrium with the source till it reaches the final state. The work done in the isothermal expansion is given by the equation (8.34) 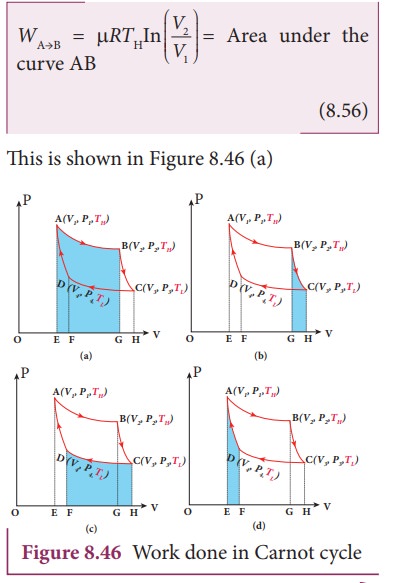 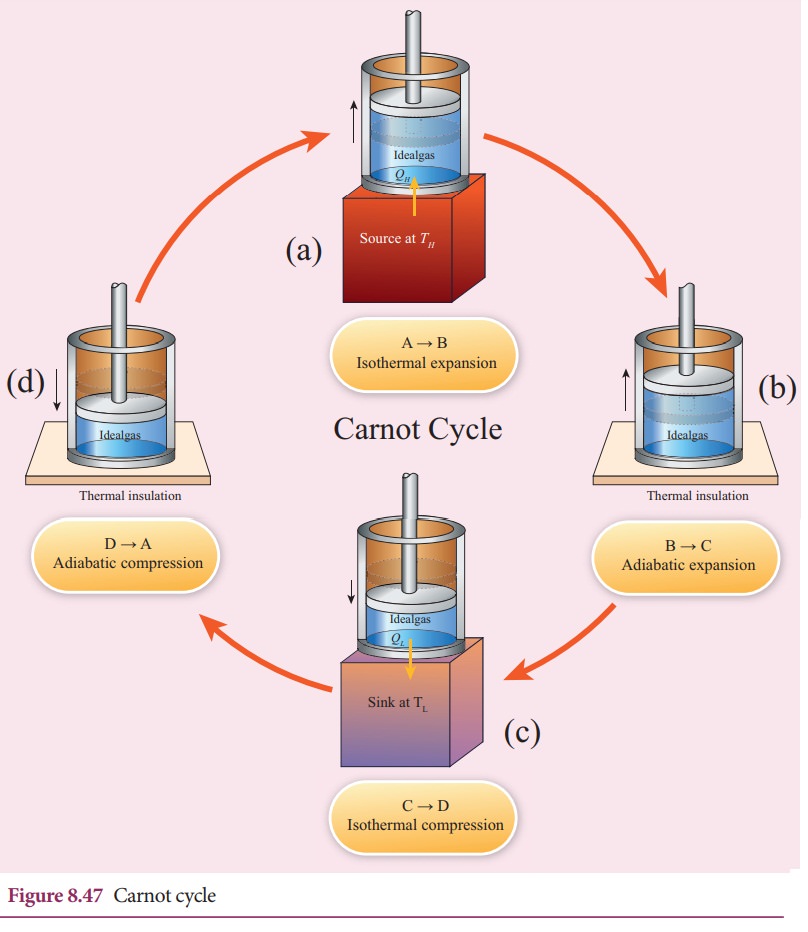 The cylinder is placed on the insulating stand and the piston is allowed to move out. As the gas expands adiabatically from volume V2 to volume V3 the pressure falls from P2 to P3. The temperature falls to TL. This adiabatic expansion is represented by curve BC in the P-V diagram. This adiabatic process also occurs quasi-statically and implying that this process is reversible and the ideal gas is in equilibrium throughout the process. It is shown in the figure 8.47(b). From the equation (8.42)

The work done by the gas in an adiabatic expansion is given by,

The cylinder is placed on the sink and the gas is isothermally compressed until the pressure and volume become P4 and V4 respectively. This is represented by the curve CD in the PV diagram as shown in Figure 8.45. Let WC→D be the work done on the gas. According to first law of thermodynamics

Here V3 is greater than V4. So the work done is negative, implying work is done on the gas.

The cylinder is placed on the insulating stand again and the gas is compressed adiabatically till it attains the initial pressure P1, volume V 1 and temperature T H. This is shown by the curve DA in the P-V diagram.

In the adiabatic compression also work is done on the gas so it is negative, as is shown in Figure 8.46 (d)

∴W=Work done by the gas – work done on the gas 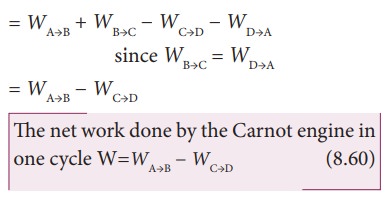 Equation (8.60) shows that the net work done by the working substance in one cycle is equal to the area (enclosed by ABCD) of the P-V diagram (Figure 8.48) 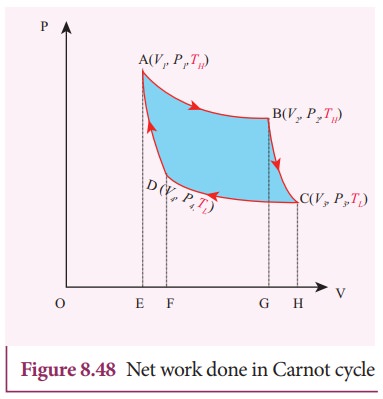 Efficiency of a Carnot engine

Efficiency is defined as the ratio of work done by the working substance in one cycle to the amount of heat extracted from the source.

From the first law of thermodynamics, 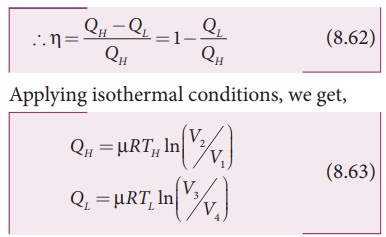 Here we omit the negative sign. Since we are interested in only the amount of heat (QL) ejected into the sink, we have

By applying adiabatic conditions, we get,

By dividing the above two equations, we get 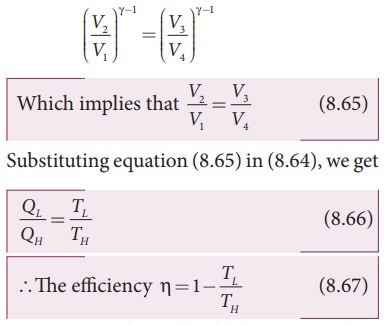 Note : TL and TH  should be expressed in Kelvin scale.

1. η is always less than 1 because TL is less than TH. This implies the efficiency cannot be 100%. It can be 1 or 100% only when TL = 0K (absolute zero of temperature) which is impossible to attain practically.

2. The efficiency of the Carnot’s engine is independent of the working substance. It depends only on the temperatures of the source and the sink. The greater the difference between the two temperatures, higher the efficiency.

3. When TH=TL the efficiency η =0. No engine can work having source and sink at the same temperature.

a) A steam engine boiler is maintained at 250°C and water is converted into steam. This steam is used to do work and heat is ejected to the surrounding air at temperature 300K. Calculate the maximum efficiency it can have?

Engine B has only 8% efficiency.

Entropy and second law of thermodynamics

We have seen in the equation (8.66) that the quantity QH/TT is equal to QL/TL. The quantity Q/T is called entropy. It is a very important thermodynamic property of a system. It is also a state variable. QH/TH  is the entropy received by the Carnot  engine  from hot reservoir and QL/TL is entropy given out by the Carnot engineL to the cold reservoir. For reversible engines (Carnot Engine) both entropies should be same, so that the change in entropy of the Carnot engine in one cycle is zero. This is proved in equation (8.66). But for all practical engines like diesel and petrol engines which are not reversible engines, they satisfy the relation QL/TL > QH/TH. In fact we can reformulate the second law of thermodynamics as follows

“For all the processes that occur in nature (irreversible process), the entropy always increases. For reversible process entropy will not change”. Entropy determines the direction in which natural process should occur.

We now come back to the question: Why does heat always flows from a state of higher temperature to one of lower temperature and not in the opposite direction? Because entropy increases when heat flows from hot object to cold object. If heat were to flow from a cold to a hot object, entropy will decrease leading to violation of second law thermodynamics.

Entropy is also called ‘measure of disorder’. All natural process occur such that the disorder should always increases.

Consider a bottle with a gas inside. When the gas molecules are inside the bottle it has less disorder. Once it spreads into the entire room it leads to more disorder. In other words when the gas is inside the bottle the entropy is less and once the gas spreads into entire room, the entropy increases. From the second law of thermodynamics, entropy always increases. If the air molecules go back in to the bottle, the entropy should decrease, which is not allowed by the second law of thermodynamics. The same explanation applies to a drop of ink diffusing into water. Once the drop of ink spreads, its entropy is increased. The diffused ink can never become a drop again. So the natural processes occur in such a way that entropy should increase for all irreversible process.