This Van de Graff generator works on the principle of electrostatic induction and action at points.

In the year 1929, Robert Van de Graaff designed a machine which produces a large amount of electrostatic potential difference, up to several million volts (107 V). This Van de Graff generator works on the principle of electrostatic induction and action at points.

A large hollow spherical conductor is fixed on the insulating stand as shown in Figure 1.65. A pulley B is mounted at the center of the hollow sphere and another pulley C is fixed at the bottom. A belt made up of insulating materials like silk or rubber runs over both pulleys. The pulley C is driven continuously by the electric motor. Two comb shaped metallic conductors E and D are fixed near the pulleys.

The comb D is maintained at a positive potential of 104 V by a power supply. The upper comb E is connected to the inner side of the hollow metal sphere. 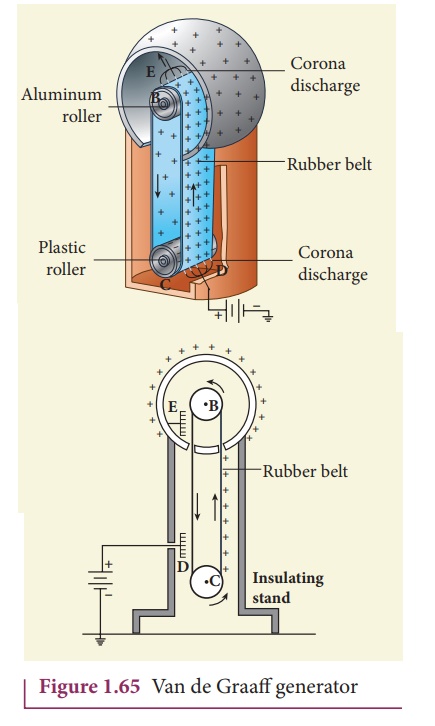 When the belt descends, it has almost no net charge. At the bottom, it again gains a large positive charge. The belt goes up and delivers the positive charges to the outer surface of the sphere. This process continues until the outer surface produces the potential difference of the order of 107 which is the limiting value. We cannot store charges beyond this limit since the extra charge starts leaking to the surroundings due to ionization of air. The leakage of charges can be reduced by enclosing the machine in a gas filled steel chamber at very high pressure.

The high voltage produced in this Van de Graaff generator is used to accelerate positive ions (protons and deuterons) for nuclear disintegrations and other applications.

Dielectric strength of air is 3 × 106 V m-1. Suppose the radius of a hollow sphere in the Van de Graff generator is R = 0.5 m, calculate the maximum potential difference created by this Van de Graaff generator.

Here Emax = 3 ×106 V/m . So the maximum potential difference created is given by