The electric charge is quantized microscopically.

The electric charge is quantized microscopically. The expressions (1.2), (1.3), (1.4) are applicable to only point charges. While dealing with the electric field due to a charged sphere or a charged wire etc., it is very difficult to look at individual charges in these charged bodies. Therefore, it is assumed that charge is distributed continuously on the charged bodies and the discrete nature of charges is not considered here. The electric field due to such continuous charge distributions is found by invoking the method of calculus. 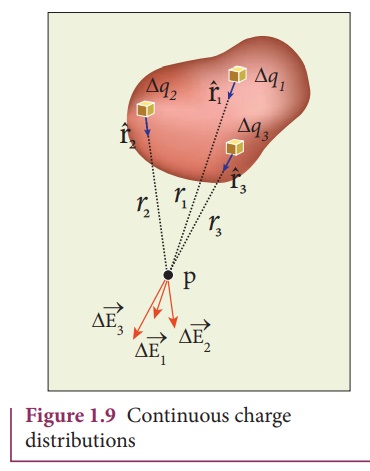 The electric field at a point P due to a charged object is approximately given by the sum of the fields at P due to all such charge elements.

However the equation (1.9) is only an approximation. To incorporate the continuous distribution of charge, we take the limit ∆q → 0 (= dq). In this limit, the summation in the equation (1.9) becomes an integration and takes the following form

Here r is the distance of the point P from the infinitesimal charge dq and r is the unit vector from dq to point P. Even though the electric field for a continuous charge distribution is difficult to evaluate, the force experienced by some test charge q in this electric field is still given by

(a) If the charge Q is uniformly distributed along the wire of length L, then linear charge density (charge per unit length) is λ = Q/L . Its unit is coulomb per meter (Cm-1).

The charge present in the infinitesimal length dl is dq = λdl. This is shown in Figure 1.10 (a). 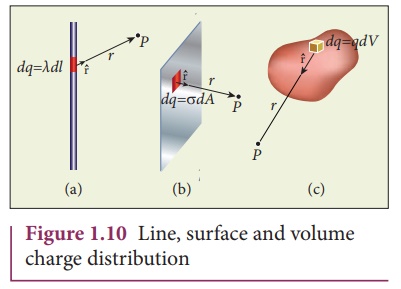 (b) If the charge Q is uniformly distributed on a surface of area A, then surface charge density (charge per unit area) is σ = Q/A . Its unit is coulomb per square meter (C m-2).

The charge present in the infinitesimal area dA is dq = σ dA. This is shown in the figure 1.10 (b).

(c) If the charge Q is uniformly distributed in a volume V, then volume charge density (charge per unit volume) is given by ρ = Q/V . Its unit is coulomb per cubic meter (C m-3).

The charge present in the infinitesimal volume element dV is dq = ρdV. This is shown in Figure 1.10(c).

A block of mass m and positive charge q is placed on an insulated frictionless inclined plane as shown in the figure. A uniform electric field E is applied parallel to the inclined surface such that the block is at rest. Calculate the magnitude of the electric field E. 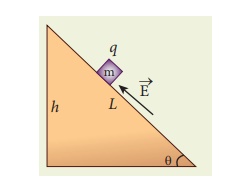 Note: A similar problem is solved in XIth Physics volume I, unit 3 section 3.3.2.

There are three forces that acts on the mass m:

(i) The downward gravitational force exerted by the Earth (mg)

(ii) The normal force exerted by the inclined surface (N)

(iii) The Coulomb force given by uniform electric field (qE)

The free body diagram for the mass m is drawn below.

A convenient inertial coordinate system is located in the inclined surface as shown in the figure. The mass m has zero net acceleration both in x and y-direction.

Along x-direction, applying Newton’s second law, we have 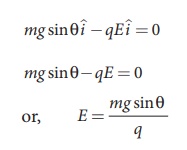 The electric field also can be expressed in terms of height and the length of the inclined surface of the plane.