Distribution of charges in a conductor

The distance between the spheres is much greater than the radii of either spheres.

Distribution of charges in a conductor

Consider two conducting spheres A and B of radii r1 and r2 respectively connected to each other by a thin conducting wire as shown in the Figure 1.62. The distance between the spheres is much greater than the radii of either spheres. 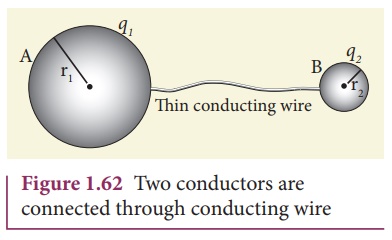 Two conducting spheres of radius r1 = 8 cm and r2 = 2 cm are separated by a distance much larger than 8 cm and are connected by a thin conducting wire as shown in the figure. A total charge of Q = +100 nC is placed on one of the spheres. After a fraction of a second, the charge Q is redistributed and both the spheres attain electrostatic equilibrium.

(a) Calculate the charge and surface charge density on each sphere.

(b) Calculate the potential at the surface of each sphere.

The electrostatic potential on the surface of the sphere A is 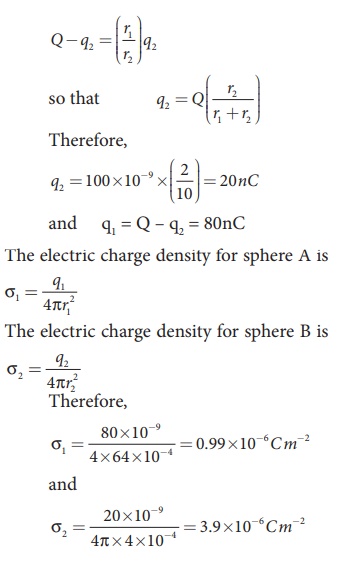 Note that the surface charge density is greater on the smaller sphere compared to the larger sphere (σ2 ≈ 4σ1) which confirms the result σ1 / σ1= r2 / r2.