Two millenniums ago, Greeks noticed that amber (a solid, translucent material formed from the resin of a fossilized tree) after rubbing with animal fur attracted small pieces of leaves and dust.

Two millenniums ago, Greeks noticed that amber (a solid, translucent material formed from the resin of a fossilized tree) after rubbing with animal fur attracted small pieces of leaves and dust. The amber possessing this property is said to be ‘charged’. It was initially thought that amber has this special property. Later people found that not only amber but even a glass rod rubbed with silk cloth, attracts pieces of papers. So glass rod also becomes ‘charged’ when rubbed with a suitable material. 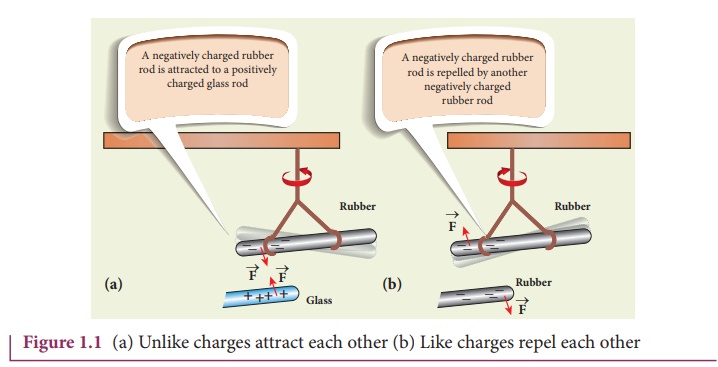 From these observations, the following inferences are made

i.            The charging of rubber rod and that of glass rod are different from one another.

iii.            The charged amber rod attracts the charged glass rod, implying that the charge in the glass rod is not the same kind of charge present in the rubber.

Thus unlike charges attract each other. Therefore, two kinds of charges exist in the universe. In the 18th century, Benjamin Franklin called one type of charge as positive (+) and another type of charge as negative (-). Based on Franklin’s convention, rubber and amber rods are negatively charged while the glass rod is positively charged. If the net charge is zero in the object, it is said to be electrically neutral.

Following the pioneering work of J. J. Thomson and E. Rutherford, in the late 19th century and in the beginning of 20th century, we now understand that the atom is electrically neutral and is made up of the negatively charged electrons, positively charged protons, and neutrons which have zero charge. The material objects made up of atoms are neutral in general. When an object is rubbed with another object (for example rubber with silk cloth), some amount of charge is transferred from one object to another due to the friction between them and the object is then said to be electrically charged. Charging the objects through rubbing is called triboelectric charging.