The temperature of water increases due to the work done by the masses.

The temperature of an object can be increased by heating it or by doing some work on it. In the eighteenth century, James Prescott Joule showed that mechanical energy can be converted into internal energy and vice versa. In his experiment, two masses were attached with a rope and a paddle wheel as shown in Figure 8.19. When these masses fall through a distance h due to gravity, both the masses lose potential energy equal to 2mgh. When the masses fall, the paddle wheel turns. Due to the turning of wheel inside water, frictional force comes in between the water and the paddle wheel. 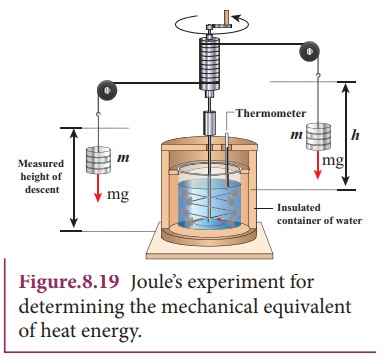 This causes a rise in temperature of the water. This implies that gravitational potential energy is converted to internal energy of water. The temperature of water increases due to the work done by the masses. In fact, Joule was able to show that the mechanical work has the same effect as giving heat. He found that to raise 1 g of an object by 1°C , 4.186 J of energy is required. In earlier days the heat was measured in calorie.

This is called Joule’s mechanical equivalent of heat.