1.     What is meant by quantisation of charges?

The charge q on any object is equal to an integral multiple of the fundamental unit of charge e.

2.     Write down Coulomb’s law in vector form and mention what each term represents.

is the unit vector directed from charge q1 to charge q2

k is the proportionality constant.

3.     What are the differences between Coulomb force and gravitational force? 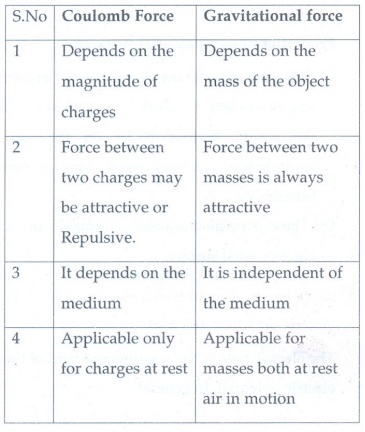 1. Depends on the magnitude of charges

2. Force between two charges may be attractive or Repulsive.

3. It depends on the medium

4. Applicable only for charges at rest

1. Depends on the mass of the object

3. It is independent of the medium

4. Applicable for masses both at rest air in motion

According to the superposition principle, the total force acting on a given charge is equal to the vector sum of forces exerted on it by all the other charges.

The force on q1 exerted by the charge q2.

The total force acting on the charge q1 is given by

The electric field at the point P at a distance r from the point charge q is the force experienced by a unit charge at that point.

is the unit vector.

The electric field is a vector quantity

Electric field lines are an imaginary straight or curved path along which a unit positive charges tends to move in an electric field.

❖ No, two electric field lines intersect each other.

❖ If two lines cross at a point, then there will be two different electric field vectors at the same point.

❖ As a consequence, if some charge is placed in the intersection point then it has to move in two different directions at the same, which is physically impossible. Hence electric field lines do not intersect.

❖ Two equal and opposite charges are separated by a small distance constitute an electric dipole.

❖ The magnitude of electric dipole moment,

Its direction is from - q to +q

9.     What is the general definition of electric dipole moment?

❖ The magnitude of the electric dipole moment is equal to the algebraic sum of the product of the magnitude of a charge and the distance of the charge from the origin.

is the position vector of charge qi from the origin.

An equipotential surface is a surface on which all the points are at the same potential.

(i) The work done to move a charge q between any two points A and B, W = q (VB - VA). If the points A and B lie on the same equipotential surface, work done is zero because VA = VB.

(ii) The electric field is always normal to an equipotential surface.

The electric field is the negative gradient of the electric potential. In general

Now if a charge q2 is brought from infinity to that point, a work must be done against the electric field of q1. This workdone is stored as the electrostatic potential energy(U) of a system of charges.

Its unit is Joule. It is a scalar quanity.

❖ Electric flux is a scalar quantity and it can be positive or negative or zero.

❖ The process of isolating a certain region of space from external field. It is based on the fact that the electric field inside both hollow and solid conductors is zero.

In the presence of an external electric field, the dipole moment is induced in the dielectric material. This is known as dielectric polarisation (or) polarisation.

is defined as the total dipole moment per unit volume of the dielectric.

Polarisation is directly proportional to the strength of the external electric field.

Where χe is a constant called tht electric susceptibility.

❖ When the external electric field applied to a dielectric is very large, it tears the atoms apart so that the bound charges become free charges. Then the dielectric starts to conduct electricity. This is called dielectric breakdown.

❖ The maximum electric field the dielectric can withstand before it breakdowns is called dielectric strength.

The capacitance C of a capacitor is defined as the ratio of the magnitude of charge on either of the conductor plates to the potential difference existing between the conductors.

Its SI unit of capacitance is coulomb per volt or farad (F). Its practical unit is µF or pF

The leakage of electric charges from the sharp points of a charged conductor is known as action of points or corona discharge.

Most objects in the universe are made up of atoms, which in turn are made up of protons, neutrons and electrons. These particles have mass, an inherent property of particles. Similarly, the electric charge is another intrinsic and fundamental property of particles. The nature of charges is understood through various experiments performed in the 19th and 20th century. The SI unit of charge is coulomb.

Benjamin Franklin argued that when one object is rubbed with another object, charges get transferred from one to the other. Before rubbing, both objects are electrically neutral and rubbing simply transfers the charges from one object to the other. (For example, when a glass rod is rubbed against silk cloth, some negative charge are transferred from glass to silk. As a result, the glass rod is positively charged and silk cloth becomes negatively charged). From these observations, he concluded that charges are neither created or nor destroyed but can only be transferred from one object to other. This is called conservation of total charges and is one of the fundamental conservation laws in physics. It is stated more generally in the following way.

‘The total electric charge in the universe is constant and charge can neither be created nor be destroyed. In any physical process, the net change in charge will always be zero.

2.     Explain in detail Coulomb’s law and its various aspects.

In the year 1786, Coulomb deduced the expression for the force between two stationary point charges in vacuum or free space. Consider two point charges q1 and q2 at rest in vacuum, and separated by a distance of r, as shown in Figure 1.2. According to Coulomb, the force on the point charge q2 exerted by another point charge q1 is

where ^r12 is the unit vector directed from charge q1 to charge q2 and k is the proportionality constant.

(iii) In SI units,and its value is 9 × 109 N m2 C-2. Here ε  is the permittivity of free space or vacuum and the value of

(iv) The magnitude of the electrostatic force between two charges each of one coulomb and separated by a distance of 1 m is calculated as follows:

This is a huge quantity, almost equivalent to the weight of one million ton. We never come across 1 coulomb of charge in practice. Most of the electrical phenomena in day-to-day life involve electrical charges of the order of µC (micro coulomb) or nC (nano coulomb).

(v) In SI units, Coulomb’s law in vacuum takes the formIn a medium of permittivity ε, the force between two point charges is given by

Since ε>εo , the force  between two point charges in a medium other than vacuum is always less than that in vacuum. We define the relative permittivity for a given medium as εr>ε/εo . For vacuum or air, εr = 1 and ε for all other media εr> 1.

·  The gravitational force between two point masses is the same whether two masses are at rest or in motion. If the charges are in motion, yet another force (Lorentz force) comes into play in addition to coulomb force.

(viii) The expression for Coulomb force is true only for point charges. But the point charge is an ideal concept. However we can apply Coulomb’s law for two charged objects whose sizes are very much smaller than the distance between them. In fact, Coulomb discovered his law by considering the charged spheres in the torsion balance as point charges. The distance between the two charged spheres is much greater than the radii of the spheres.

4.     Calculate the electric field due to a dipole on its axial line and equatorial plane. 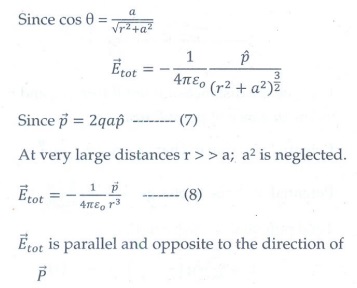 5.     Derive an expression for the torque experienced by a dipole due to a uniform electric field.

6.     Derive an expression for electrostatic potential due to a point charge.

7.     Derive an expression for electrostatic potential due to an electric dipole.

8.     Obtain an expression for potential energy due to a collection of three point charges which are separated by finite distances.

9. Derive an expression for electrostatic potential energy of the dipole in a uniform electric field.

11. Obtain the expression for electric field due to an infinitely long charged wire.

12. Obtain the expression for electric field due to an charged infinite plane sheet.

13. Obtain the expression for electric field due to an uniformly charged spherical shell.

14. Discuss the various properties of conductors in electrostatic equilibrium.

15. Explain the process of electrostatic induction.

16. Explain dielectrics in detail and how an electric field is induced inside a dielectric.

17. Obtain the expression for capacitance for a parallel plate capacitor.

18. Obtain the expression for energy stored in the parallel plate capacitor.

19. Explain in detail the effect of a dielectric placed in a parallel plate capacitor.

20. Derive the expression for resultant capacitance, when capacitors are connected in series and in parallel.

21. Explain in detail how charges are distributed in a conductor, and the principle behind the lightning conductor.

22. Explain in detail the construction and working of a Van de Graaff generator.