In this chapter, let us see a few experiments of Faraday, the results and the phenomenon of Electromagnetic Induction.

In the previous chapter, we have learnt that whenever an electric current flows through a conductor, it produces a magnetic field around it. This was discovered by Christian Oersted. Later, Ampere proved that a current-carrying loop behaves like a bar magnet. These are the magnetic effects produced by the electric current.

Physicists then began to think of the converse effect. Is it possible to produce an electric current with the help of a magnetic field? A series of experiments were conducted to establish the converse effect. These experiments were done by Michael Faraday of UK and Joseph Henry of USA, almost simultaneously and independently. These attempts became successful and led to the discovery of the phenomenon, called Electromagnetic Induction. Michael Faraday is credited with the discovery of electromagnetic induction in 1831.

In this chapter, let us see a few experiments of Faraday, the results and the phenomenon of Electromagnetic Induction. Before that, we will recollect the concept of magnetic flux linked with a surface area. 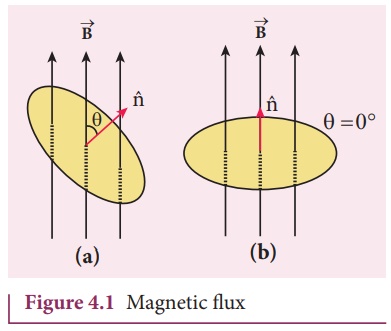