Construction and working Principle of transformer The principle of transformer is the mutual induction between two coils. That is, when an electric current passing through a coil changes with time, an emf is induced in the neighbouring coil.

Transformer is a stationary device used to transform electrical power from one circuit to another without changing its frequency. The applied alternating voltage is either increased or decreased with corresponding decrease or increase of current in the circuit.

Construction and working of transformer

The principle of transformer is the mutual induction between two coils. That is, when an electric current passing through a coil changes with time, an emf is induced in the neighbouring coil. 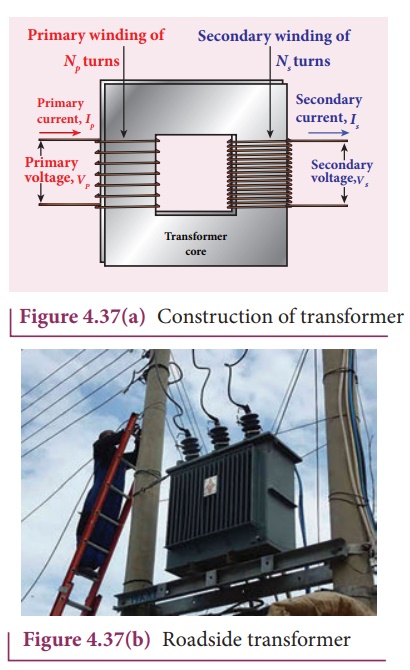 In the simple construction of transformers, there are two coils of high mutual inductance wound over the same transformer core. The core is generally laminated and is made up of a good magnetic material like silicon steel. Coils are electrically insulated but magnetically linked via transformer core (Figure 4.37).

The coil across which alternating voltage is applied is called primary coil P and the coil from which output power is drawn out is called secondary coil S. The assembled core and coils are kept in a container which is filled with suitable medium for better insulation and cooling purpose.

As a result of flux change, emf is induced in both primary and secondary coils. The emf induced in the primary coil εp is almost equal and opposite to the applied voltage υp and is given by

where N p and Ns are the number of turns in the primary and secondary coil respectively. If the secondary circuit is open, then εs = υs where υs is the voltage across secondary coil.

This constant K is known as voltage transformation ratio. For an ideal transformer,

where ip and is are the currents in the primary and secondary coil respectively.

Equation 4.33 is written in terms of amplitude of corresponding quantities,

This is the case of step-up transformer in which voltage is increased and the corresponding current is decreased.

This is step-down transformer where voltage is decreased and the current is increased.

Efficiency of a transformer:

The efficiency η of a transformer is defined as the ratio of the useful output power to the input power. Thus

Transformers are highly efficient devices having their efficiency in the range of 96 – 99%. Various energy losses in a transformer will not allow them to be 100% efficient.