AC circuit containing a resistor, an inductor and a capacitor in series - Series RLC circuit

Consider a circuit containing a resistor of resistance R, a inductor of inductance L and a capacitor of capacitance C connected across an alternating voltage source.

AC circuit containing a resistor, an inductor and a capacitor in series - Series RLC circuit 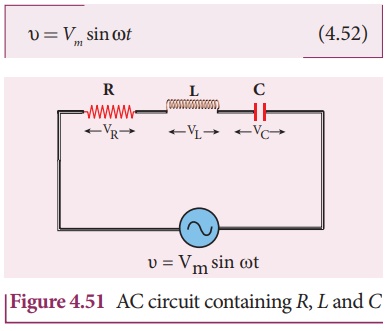 Let i be the resulting circuit current in the circuit at that instant. As a result, the voltage is developed across R, L and C. We know that voltage across R (VR) is in phase with i, voltage across L (VL) leads i by π/2 and voltage across C (VC) lags i by π/2.

The phasor diagram is drawn with current as the reference phasor. The current is represented by the phasor 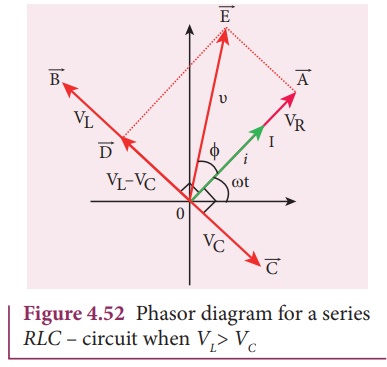 The length of these phasors are

The circuit is either effectively inductive or capacitive or resistive that depends on the value of VL or VC. Let us assume that VL > VC so that net voltage drop across L-C combination is VL – VC which is represented by a phasor

By parallelogram law, the diagonal

gives the resultant voltage υ of VR and (VL – VC) and its length OE is equal to Vm. Therefore, 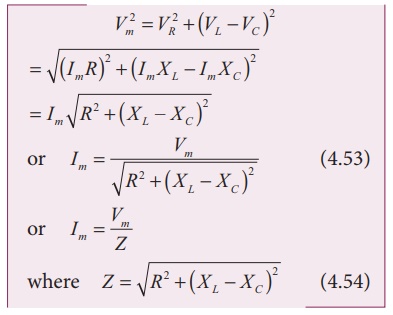 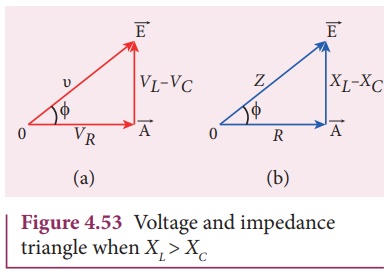 From phasor diagram, the phase angle between υ and i is found out from the following relation

(i) If XL > XC, (XL−XC) is positive and phase angle ϕ is also positive. It means that the applied voltage leads the current by ϕ (or current lags behind voltage by ϕ). The circuit is inductive.

(ii) If XL < XC, (XL − XC) is negative and ϕ is also negative. Therefore current leads voltage by ϕ and the circuit is capacitive.

(iii) If XL = XC, ϕ is zero. Therefore current and voltage are in the same phase and the circuit is resistive.