A circular antenna of area 3 m2 is installed at a place in Madurai. The plane of the area of antenna is inclined at 47º with the direction of Earth’s magnetic field. If the magnitude of Earth’s field at that place is 40773.9 nT find the magnetic flux linked with the antenna. 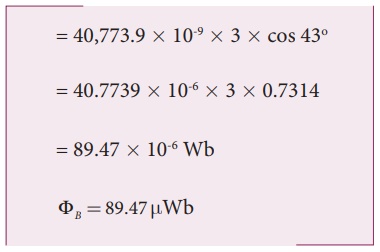 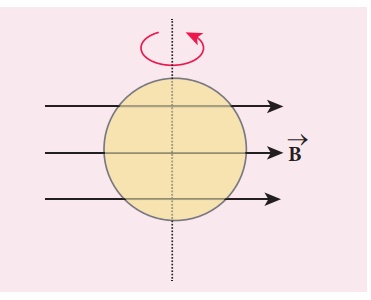 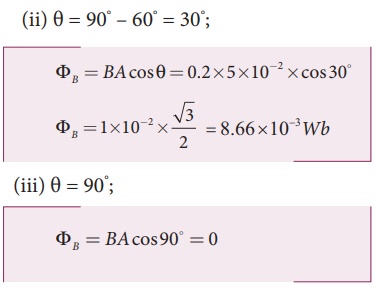 A cylindrical bar magnet is kept along the axis of a circular solenoid. If the magnet is rotated about its axis, find out whether an electric current is induced in the coil.

The magnetic field of a cylindrical magnet is symmetrical about its axis. As the magnet is rotated along the axis of the solenoid, there is no induced current in the solenoid because the flux linked with the solenoid does not change due to the rotation of the magnet.

A closed coil of 40 turns and of area 200 cm2, is rotated in a magnetic field of flux density 2 Wb m-2. It rotates from a position where its plane makes an angle of 30º with the field to a position perpendicular to the field in a time 0.2 sec. Find the magnitude of the emf induced in the coil due to its rotation. 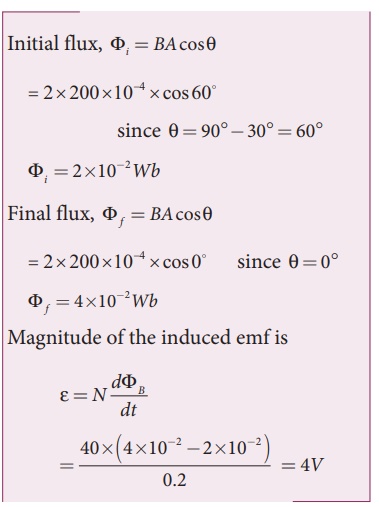 A straight conducting wire is dropped horizontally from a certain height with its length along east – west direction. Will an emf be induced in it? Justify your answer.

Yes! An emf will be induced in the wire because it moves perpendicular to the horizontal component of Earth’s magnetic field.

If the current i flowing in the straight conducting wire as shown in the figure decreases, find out the direction of induced current in the metallic square loop placed near it. 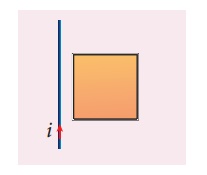 The magnetic flux passes perpendicular to the plane of the circuit and is directed into the paper. If the magnetic flux varies with respect to time as per the following relation: ΦB = (2t3 +3t2 + 8t +5) mWb , what is the magnitude of the induced emf in the loop when t = 3 s? Find out the direction of current through the circuit. 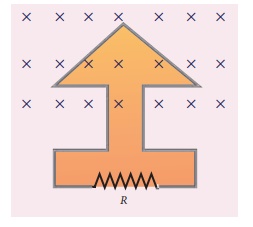 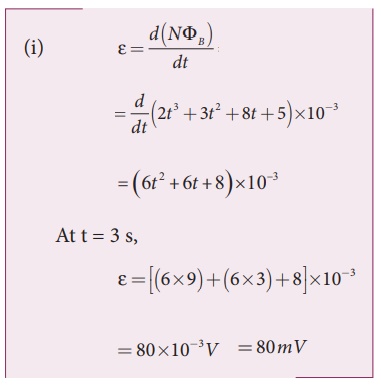 A conducting rod of length 0.5 m falls freely from the top of a building of height 7.2 m at a place in Chennai where the horizontal component of Earth’s magnetic field is 40378.7 nT. If the length of the rod is perpendicular to Earth’s horizontal magnetic field, find the emf induced across the conductor when the rod is about to touch the ground. [Take g = 10 m s-2]

The final velocity of the rod is 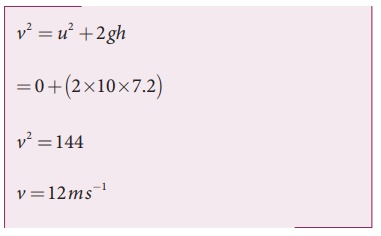 Induced emf when the rod is about to touch the ground, ε = BH lv

A copper rod of length l rotates about one of its ends with an angular velocity ω in a magnetic field B as shown in the figure. The plane of rotation is perpendicular to the field. Find the emf induced between the two ends of the rod. 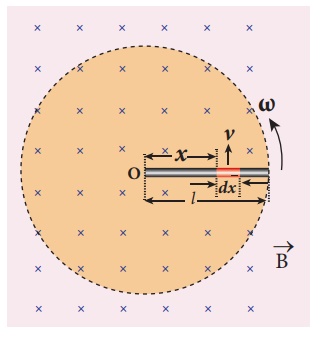 Consider a small element of length dx at a distance x from the centre of the circle described by the rod. As this element moves perpendicular to the field with a linear velocity v = xω , the emf developed in the element dx is

This rod is made up of many such elements, moving perpendicular to the field. The emf developed across two ends is