Though the production of eddy current is undesirable in some cases, it is useful in some other cases. A few of them are 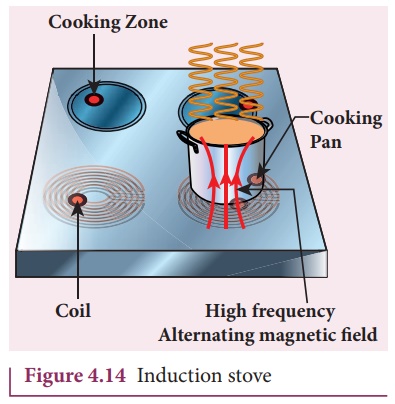 Induction stove is used to cook the food quickly and safely with less energy consumption. Below the cooking zone, there is a tightly wound coil of insulated wire. The cooking pan made of suitable material, is placed over the cooking zone. When the stove is switched on, an alternating current flowing in the coil produces high frequency alternating magnetic field which induces very strong eddy currents in the cooking pan. The eddy currents in the pan produce so much of heat due to Joule heating which is used to cook the food.

Note: The frequency of the domestic AC supply is increased from 50–60 Hz to around 20–40 KHz before giving it to the coil in order to produce high frequency alternating magnetic field. 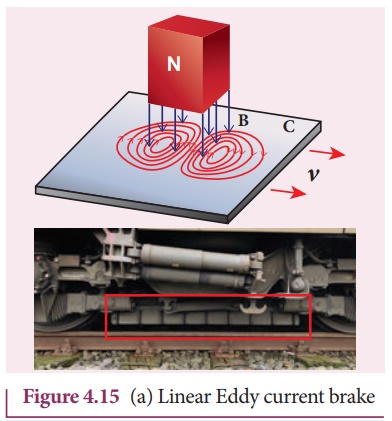 In some cases, the circular disc, connected to the wheel of the train through a common shaft, is made to rotate in between the poles of an electromagnet. When there is a relative motion between the disc and the magnet, eddy currents are induced in the disc which stop the train. This is Eddy current circular brake (Figure 4.15(b)) 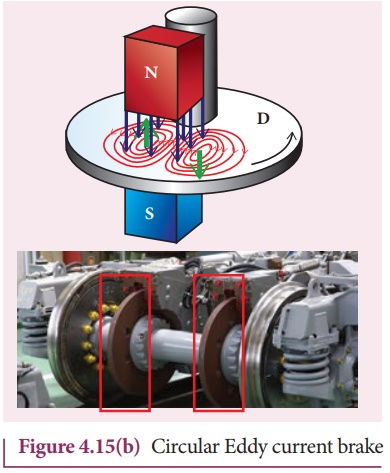 It is one of the simple non–destructive testing methods to find defects like surface cracks, air bubbles present in a specimen. A coil of insulated wire is given an alternating electric current so that it produces an alternating magnetic field. When this coil is brought near the test surface, eddy current is induced in the test surface. The presence of defects causes the change in phase and amplitude of the eddy current that can be detected by some other means.In this way, the defects present in the specimen are identified (Figure 4.16). 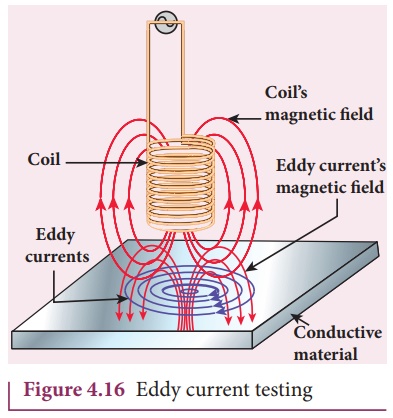 The armature of the galvanometer coil is wound on a soft iron cylinder. 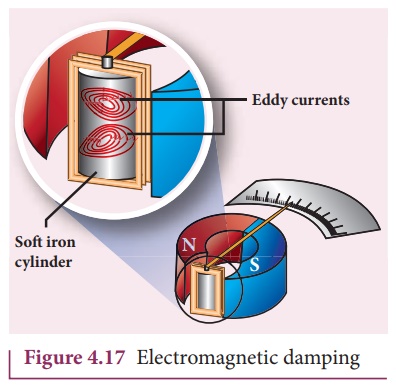 Once the armature is deflected, the relative motion between the soft iron cylinder and the radial magnetic field induces eddy current in the cylinder (Figure 4.17). The damping force due to the flow of eddy current brings the armature to rest immediately and then galvanometer shows a steady deflection. This is called electromagnetic damping.