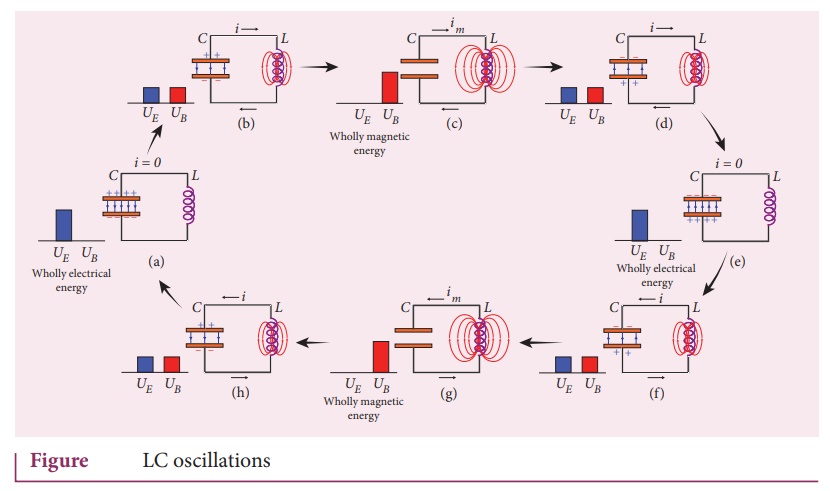 Whenever energy is given to a circuit containing a pure inductor of inductance L and a capacitor of capacitance C, the energy oscillates back and forth between the magnetic field of the inductor and the electric field of the capacitor.

We have learnt that energy can be stored in both inductors and capacitors. In inductors, the energy is stored in the form of magnetic field while in capacitors; it is stored as the electric field. 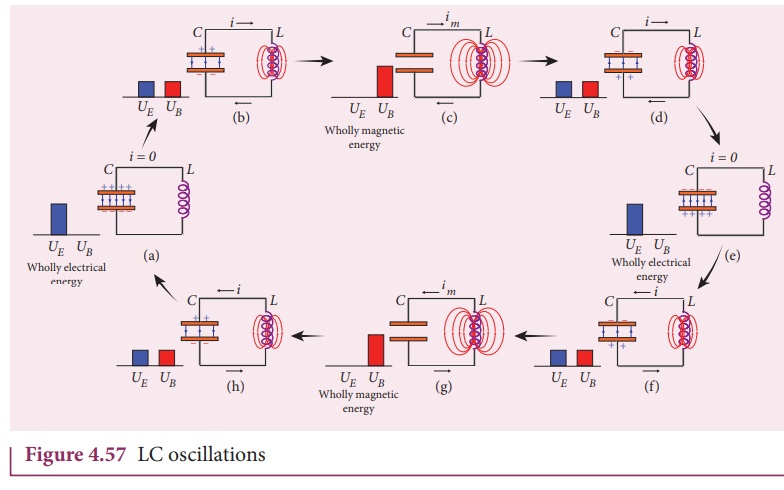 At that instant, the total energy is the sum of electrical and magnetic energies (Figure 4.57(b)).

When the charges in the capacitor are exhausted, its energy becomes zero i.e., UE = 0 . The energy is fully transferred to the magnetic field of the inductor and its energy is maximum. This maximum energy is given by UB=LI m 2/2 Where Im is the maximum  current flowing in the circuit. The total energy is wholly magnetic (Figure 4.57(c)).

The state of the circuit is similar to the initial state but the difference is that the capacitor is charged in opposite direction. The capacitor then starts to discharge through the inductor with anti-clockwise current. The total energy is the sum of the electrical and magnetic energies (Figure 4.57(f)).

As already explained, the processes are repeated in opposite direction (Figure 4.57(g) and (h)). Finally, the circuit returns to the initial state (Figure 4.57(a)). Thus, when the circuit goes through these stages, an alternating current flows in the circuit. As this process is repeated again and again, the electrical oscillations of definite frequency are generated. These are known as LC oscillations.

In the ideal LC circuit, there is no loss of energy. Therefore, the oscillations will continue indefinitely. Such oscillations are called undamped oscillations.