There are two forms of energy involved in LC oscillations. One is electrical energy of the charged capacitor; the other magnetic energy of the inductor carrying current.

By examining the Table 4.3, the analogies between the various quantities can be understood and these correspondences are given in the Table 4.4.

The angular frequency of oscillations of a spring-mass is given by (Refer equation 10.22 of section 10.4.1 of XI physics text book).

From Table 4.4, k → 1/C and m → L. Therefore, the angular frequency of LC oscillations is given by

The mechanical energy of the spring-mass system is given by

The energy E remains constant for varying values of x and v. Differentiating E with respect to time, we get 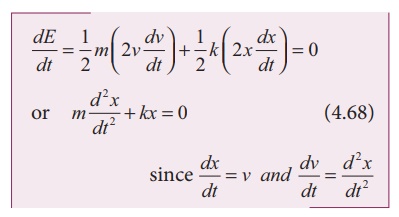 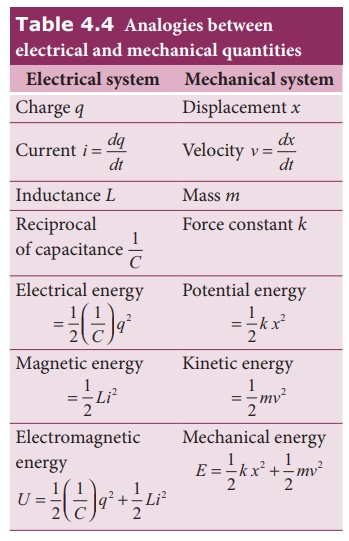 This is the differential equation of the oscillations of the spring-mass system. The general solution of equation (4.68) is of the form

where Xm is the maximum value of x ( t ), the angular frequency and ϕ the phase constant.

Similarly, the electromagnetic energy of the LC system is given by 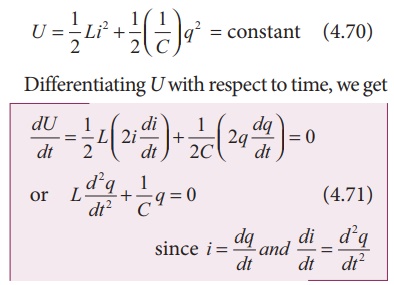 The general solution of equation (4.71) is of the form

where Qm  is the maximum value of q ( t ), the angular frequency and ϕ the phase constant.

Current in the LC circuit

The current flowing in the LC circuit is obtained by differentiating q(t) with respect to time.

The equation (4.73) clearly shows that current varies as a function of time t. In fact, it is a sinusoidally varying alternating current with angular frequency ω.

By differentiating equation (4.72) twice, we get 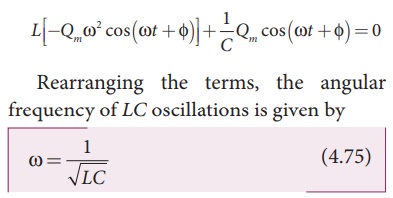 This equation is the same as that obtained from qualitative analogy.

Oscillations of electrical and magnetic energy

The electrical energy of the LC oscillator is

If the two energies are plotted with an assumption of f = 0 , we obtain Figure 4.58. 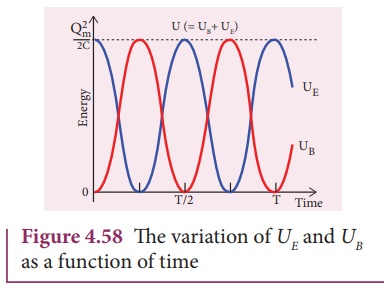 From the graph, it can be noted that

(iii) When UE is Maximum, UB is zero and vice versa.