The root mean square value of an alternating current is defined as the square root of the mean of the squares of all currents over one cycle.

The term RMS refers to time-varying sinusoidal currents and voltages and not used in DC systems.

The root mean square value of an alternating current is defined as the square root of the mean of the squares of all currents over one cycle. It is denoted by IRMS . For alternating voltages, the RMS value is given by VRMS.

The alternating current i = I m sin ω t or i = Im sinθ ,  is represented graphically in Figure 4.42. The corresponding squared current wave is also shown by the dotted lines.

The sum of the squares of all currents over one cycle is given by the area of one cycle of squared wave. Therefore,

An elementary area of thickness dθ is considered in the first half-cycle of the squared current wave as shown in Figure 4.42. Let i2 be the mid-ordinate of the element.

Area of the element = i 2dθ 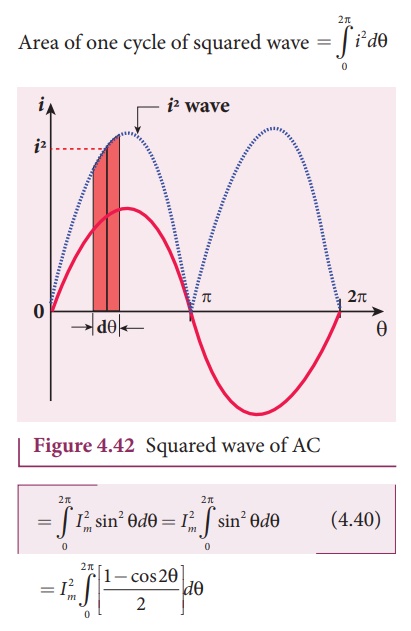 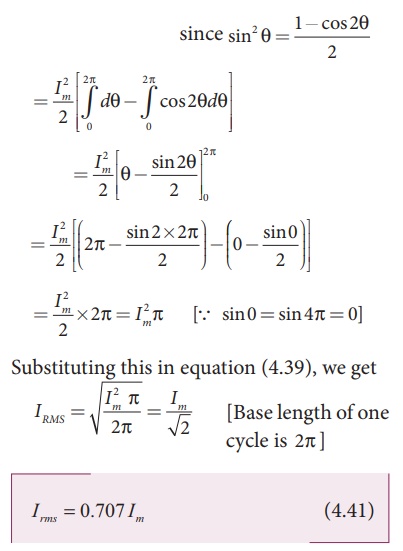 Thus we find that for a symmetrical sinusoidal current rms value of current is 70.7 % of its peak value.

Similarly for alternating voltage, it can be shown that

Write down the equation for a sinusoidal voltage of 50 Hz and its peak value is 20 V. Draw the corresponding voltage versus time graph. 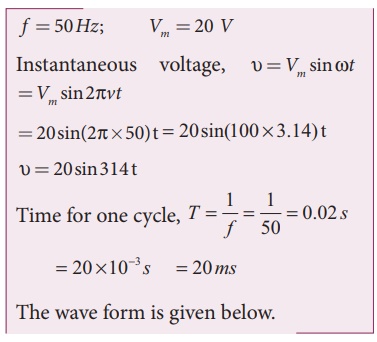 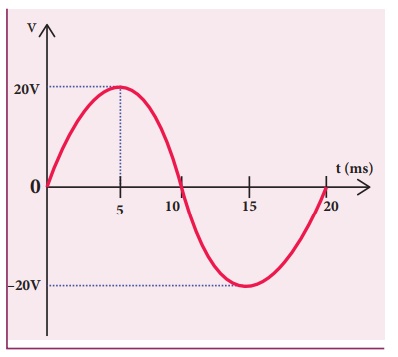 The equation for an alternating current is given by i = 77 sin 314t. Find the peak value, frequency, time period and instantaneous value at t = 2 ms.

The general equation of an alternating current is i = Im sin ωt . On comparsion,

A sinusoidal alternating voltage (or current) can be represented by a vector which rotates about the origin in anti-clockwise direction at a constant angular velocity ω. Such a rotating vector is called a phasor. A phasor is drawn in such a way that

·        the angle between the phasor and the axis of reference (positive x-axis) indicates the phase of the alternating voltage (or current).

The notion of phasors is introduced to analyse phase relationship between voltage and current in different AC circuits.

The diagram which shows various phasors and their phase relations is called phasor diagram. Consider a sinusoidal alternating voltage υ = Vm sin ωt applied to a circuit. This voltage can be represented by a phasor, namely 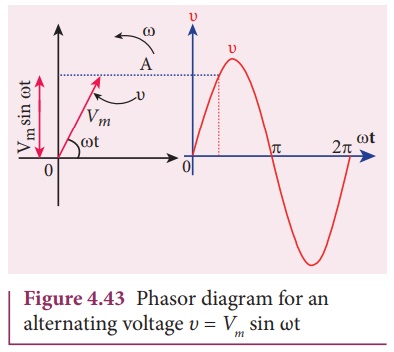 Here the length of

equals the peak value (Vm), the angle it makes with x-axis gives the phase (ωt) of the applied voltage. Its projection on y-axis provides the instantaneous value (Vm sin ωt) at that instant. 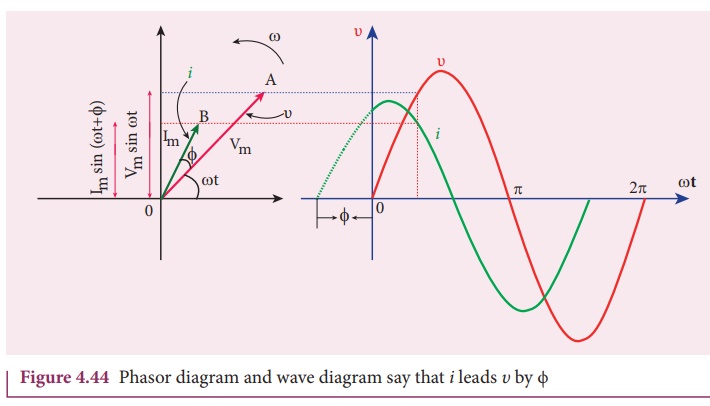 rotates about O with angular velocity ω in anti-clockwise direction, the waveform of the voltage is generated. For one full rotation of

, one cycle of voltage is produced.