For a given gas at low pressure (density) kept in a container of volume V, experiments revealed the following information.

·           When the gas is kept at constant pressure, the volume of the gas is directly proportional to absolute temperature. V ∝T . It was discovered by Jacques Charles (1743-1823) and is known as Charles’ law.

We can infer that C is proportional to the number of particles in the gas container by considering the following argument. If we take two containers of same type of gas with same volume V, same pressure P and same temperature T, then the gas in each container obeys the above equation. PV = CT. If the two containers of gas is considered as a single system, then the pressure and temperature of this combined system will be same but volume will be twice and number of particles will also be double as shown in Figure 8.2

So the ideal gas law can be stated as follows

The equation (8.1) can also be expressed in terms of mole.

This is called the equation of state for an ideal gas. It relates the pressure, volume and temperature of thermodynamic system at equilibrium.

A student comes to school by a bicycle whose tire is filled with air at a pressure 240 kPa at 27°C. She travels 8 km to reach the school and the temperature of the bicycle tire increases to 39°C. What is the change in pressure in the tire when the student reaches school? 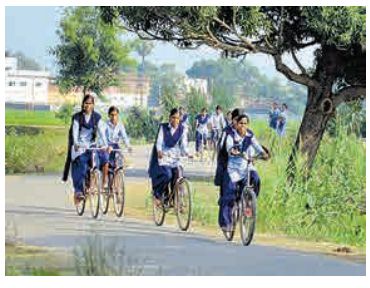 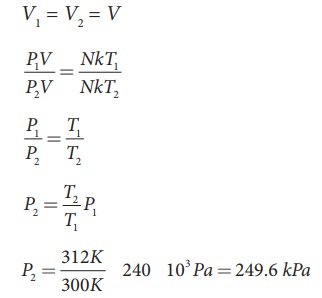 When a person breaths, his lungs can hold up to 5.5 Litre of air at body temperature 37°C and atmospheric pressure (1 atm =101 kPa). This Air contains 21% oxygen. Calculate the number of oxygen molecules in the lungs. 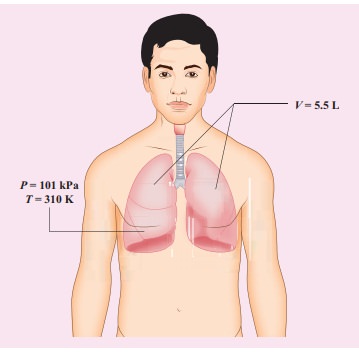 We can treat the air inside the lungs as an ideal gas. To find the number of molecules, we can use the ideal gas law.

Only 21% of N are oxygen. The total number of oxygen molecules

Calculate the volume of one mole of any gas at STP and at room temperature (300K) with the same pressure 1 atm.

By substituting the values 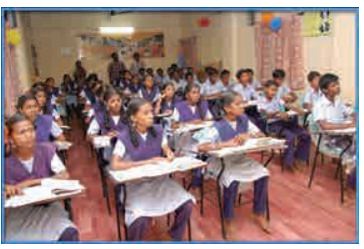 The number of mole μ=

Air is the mixture of about 20% oxygen, 79% nitrogen and remaining one percent are argon, hydrogen, helium, and xenon. The molar mass of air is 29 gmol-1.