the disturbance which carries energy and momentum from one point in space to another point in space without the transfer of the medium is known as a wave.

In the previous chapter, we have discussed the oscillation of a particle. Consider a medium which consists of a collection of particles. If the disturbance is created at one end, it propagates and reaches the other end. 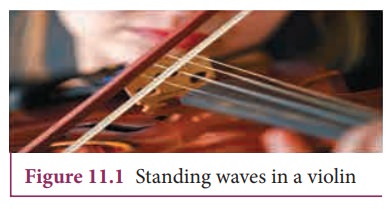 Standing near a beach, one can observe tides in the ocean reaching the seashore with a similar wave pattern; hence they are called ocean waves. A rubber band when plucked vibrates like a wave which is an example of a standing wave. These are shown in Figure 11.2. Other examples of waves are light waves (electromagnetic waves), through which we observe and enjoy the beauty of nature and sound waves using which we hear and enjoy pleasant melodious songs. Day to day applications of waves are numerous, as in mobile phone communication, laser surgery, etc.

Ripples and wave formation on the water 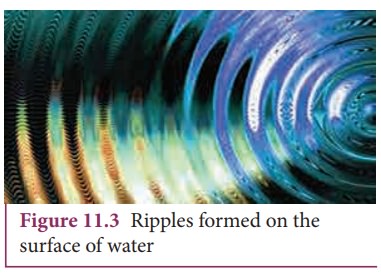 Suppose we drop a stone in a trough of still water, we can see a disturbance produced at the place where the stone strikes the water surface as shown in Figure 11.3. We find that this disturbance spreads out (diverges out) in the form of concentric circles of ever increasing radii (ripples) and strike the boundary of the trough. This is because some of the kinetic energy of the stone is transmitted to the water molecules on the surface. Actually the particles of the water (medium) themselves do not move outward with the disturbance. This can be observed by keeping a paper strip on the water surface. The strip moves up and down when the disturbance (wave) passes on the water surface. This shows that the water molecules only undergo vibratory motion about their mean positions.

Formation of waves on stretched string

Let us take a long string and tie one end of the string to the wall as shown in Figure 11.4 (a). If we give a quick jerk, a bump (like pulse) is produced in the string as shown in Figure 11.4 (b). Such a disturbance is sudden and it lasts for a short duration, hence it is known as a wave pulse. If jerks are given continuously then the waves produced are standing waves. Similar waves are produced by a plucked string in a guitar. 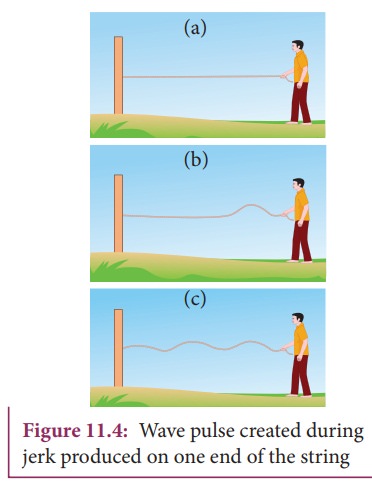 Formation of waves in a tuning fork

When we strike a tuning fork on a rubber pad, the prongs of the tuning fork vibrate about their mean positions. The prong vibrating about a mean position means moving outward and inward, as indicated in the Figure 11.5. When a prong moves outward, it pushes the layer of air in its neighbourhood which means there is more accumulation of air molecules in this region. Hence, the density and also the pressure increase. These regions are known as compressed regions or compressions. This compressed air layer moves forward and compresses the next neighbouring layer in a similar manner. Thus a wave of compression advances or passes through air. When the prong moves inwards, the particles of the medium are moved to the right. In this region both density and pressure are low. It is known as a rarefaction or elongation. 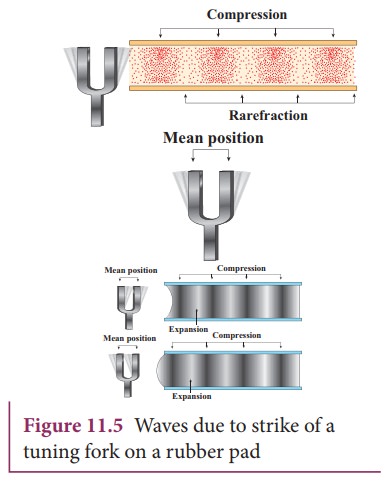 ·           For the propagation of the waves, the medium must possess both inertia and elasticity, which decide the velocity of the wave in that medium.

·           In a given medium, the velocity of a wave is a constant whereas the constituent particles in that medium move with different velocities at different positions. Velocity is maximum at their mean position and zero at extreme positions.

Mechanical wave motion and its types

Wave motion can be classified into two types

Further, waves can be classified into two types 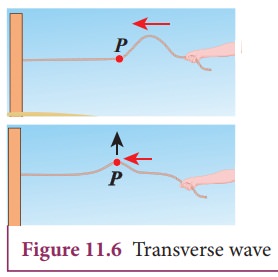 In transverse wave motion, the constituents of the medium oscillate or vibrate about their mean positions in a direction perpendicular to the direction of propagation (direction of energy transfer) of waves as shown in Figure 11.6.

In longitudinal wave motion, the constituent of the medium oscillate or vibrate about their mean positions in a direction parallel to the direction of propagation (direction of energy transfer) of waves as shown in Figure 11.7. 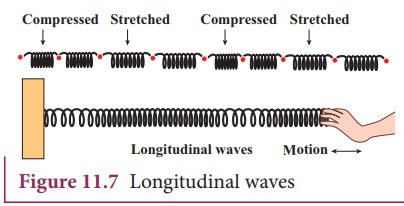