Velocity of Waves in Different Media

Suppose a hammer is stroked on long rails at a distance and when a person keeps his ear near the rails at the other end he/she will hear two sounds, at different instants.
VELOCITY OF WAVES IN DIFFERENT MEDIA

Suppose a hammer is stroked on long rails at a distance and when a person keeps his ear near the rails at the other end he/she will hear two sounds, at different instants. The sound that is heard through the rails (solid medium) is faster than the sound we hear through the air (gaseous medium). This implies the velocity of sound is different in different media.

In this section, we shall derive the velocity of waves in two different cases:

1. The velocity of a transverse waves along a stretched string.

2. The velocity of a longitudinal waves in an elastic medium.

1. Velocity of transverse waves in a stretched string

Consider an elemental segment in the string as shown in the Figure 11.15 (b). Let A and B be two points on the string at an instant of time. Let dl and dm be the length and mass of the elemental string, respectively. By definition, linear mass density, μ is

The elemental string AB has a curvature which looks like an arc of a circle with centre at O, radius R and the arc subtending an angle θ at the origin O as shown in Figure 11.15(b). The angle θ can be written in terms of arc length and radius as θ = dl/R. The centripetal acceleration supplied by the tension in the string is

Then, centripetal force can be obtained when mass of the string (dm) is included in equation (11.7)

The centripetal force experienced by elemental string can be calculated by substituting equation (11.6) in equation (11.8) we get

The tension T acts along the tangent of the elemental segment of the string at A and B. Since the arc length is very small, variation in the tension force can be ignored. We can resolve T into horizontal component Tcos(θ/2) and vertical component T sin(θ/2).

Since the amplitude of the wave is very small when it is compared with the length of the string, the sine of small angle is approximated as sin(θ/2)≈ θ/2. Hence, equation (11.10) can be written as

Applying Newton’s second law to the       elemental string in the radial direction, under equilibrium, the radial component of the force is equal to the centripetal force. Hence equating equation (11.9) and equation (11.12), we have

The velocity of the string is

a. directly proportional to the square root of the tension force

b. inversely proportional to the square root of linear mass density

c. independent of shape of the waves.

2. Velocity of longitudinal waves in an elastic medium

Consider an elastic medium (here we assume air) having a fixed mass contained in a long tube (cylinder) whose cross sectional area is A and maintained under a pressure P. One can generate longitudinal waves in the fluid either by displacing the fluid using a piston or by keeping a vibrating tuning fork at one end of the tube. Let us assume that the direction of propagation of waves coincides with the axis of the cylinder. 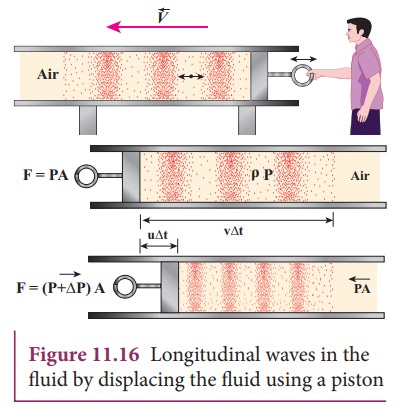 Let ρ be the density of the fluid which is initially at rest. At t = 0, the piston at left end of the tube is set in motion toward the right with a speed u.

Then, the momentum imparted due to motion of piston with velocity u is

But the change in momentum is impulse.

The net impulse is

When the sound wave passes through air, the small volume element (ΔV) of the air undergoes regular compressions and rarefactions. So, the change in pressure can also be written as

where, V is original volume and B is known as bulk modulus of the elastic medium.

In general, the velocity of a longitudinal wave in elastic medium is v = √E/√P where E is the modulus of elasticity of the medium.

Cases: For a solid :

where η is the modulus of rigidity, K is the bulk modulus and ρ is the density of the rod.

where, K is the bulk modulus and ρ is the density of the rod.

Therefore, longitudinal waves travel faster in a solid than in a liquid or a gas. Now you may understand why a shepherd checks before crossing railway track by keeping his ears on the rails to safegaurd his cattle.

An increase in pressure of 100 kPa causes a certain volume of water to decrease by 0.005% of its original volume.

(a) Calculate the bulk modulus of water?.

(b) Compute the speed of sound (compressional waves) in water?. 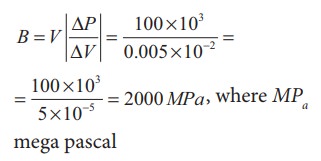 (b) Speed of sound in water is 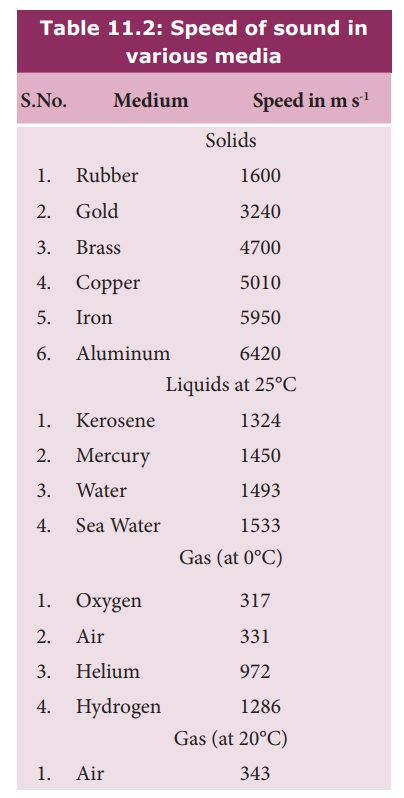