When the wave hits the rigid boundary it bounces back to the original medium and can interfere with the original waves.

When the wave hits the rigid boundary it bounces back to the original medium and can interfere with the original waves. A pattern is formed, which are known as standing waves or stationary waves. Consider two harmonic progressive waves (formed by strings) that have the same amplitude and same velocity but move in opposite directions. Then the displacement of the first wave (incident wave) is

and the displacement of the second wave (reflected wave) is

both will interfere with each other by the principle of superposition, the net displacement is

This represents a stationary wave or standing wave, which means that this wave does not move either forward or backward, whereas progressive or travelling waves will move forward or backward. Further, the displacement of the particle in equation (11.63) can be written in more compact form,

where, Aʹ = 2Asin(kx), implying that the particular element of the string executes simple harmonic motion with amplitude equals to Aʹ. The maximum of this amplitude occurs at positions for which

where m takes half integer or half integral values. The position of maximum amplitude is known as antinode. Expressing wave number in terms of wavelength, we can represent the anti-nodal positions as 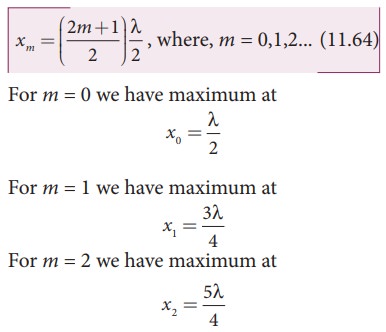 The distance between two successive anti-nodes can be computed by

Similarly, the minimum of the amplitude A' also occurs at some points in the space, and these points can be determined by setting

where n takes integer or integral values. Note that the elements at these points do not vibrate (not move), and the points are called nodes. The nthnodal positions is given by,

The distance between any two successive nodes can be calculated as