The waves which require medium for their propagation are known as mechanical waves.

The waves which do not require medium for their propagation are known as non-mechanical waves.

For a transverse wave, the vibration of particles in a medium is perpendicular to the direction of propagation of the wave.

For a longitudinal wave, the vibration of particles in a medium is parallel to the direction of propagation of the wave.

Elasticity and inertia are necessary properties of the medium for wave propagation.

Waves formed in still water (ripples) are transverse and wave formed due to vibration of tuning fork is longitudinal.

The distance between two consecutive crests or troughs is known as wavelength, λ.

The number of waves which crossed a point per second is known as frequency, f.

The time taken by one wave to cross a point is known as time period, T.

Velocity of the wave is v = λf.

Frequency is source dependent and wave velocity is medium dependent.

The velocity of a transverse wave produce in a stretched string depends on tension in  the string and mass per unit length. It does not depend on shape of the wave form.

Velocity of transverse wave on a string is v

Velocity of longitudinal wave in an elastic medium is v

The minimum distance from a sound reflecting wall to hear an echo at 20°C is 17.2 meters.

When we superimpose two or more waves with slightly different frequencies then a sound of periodically varying amplitude at a point is observed. This phenomenon is known as beats. The number of amplitude maxima per second is called beat frequency.

Loudness of sound is defined as “the degree of sensation of sound produced in the ear or the perception of sound by the listener”.

The intensity of sound is defined as “the sound power transmitted per unit area placed normal to the propagation of sound wave ”.

A closed organ pipe has only odd harmonics and the corresponding frequency of the nth harmonic is fn = (2n + 1) f1.

The open organ pipe has all harmonics and frequency of the nth harmonic is fn = n f1.

When the Source moves towards a stationary observer, the apparent frequency f ′= f (1+v/vs) 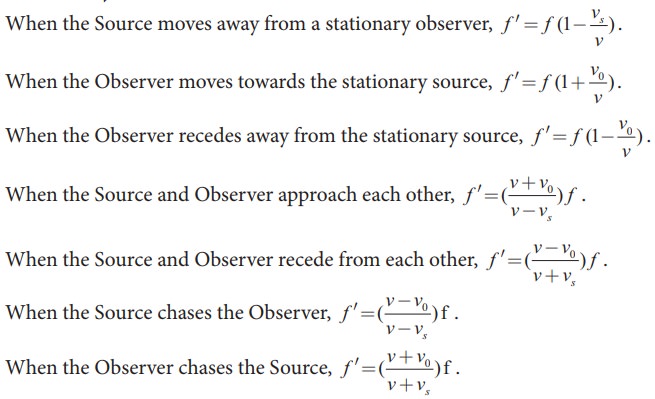