Often we have noticed that the siren sound coming from a police vehicle or ambulance increases when it comes closer to us and decreases when it moves away from us.

Often we have noticed that the siren sound coming from a police vehicle or ambulance increases when it comes closer to us and decreases when it moves away from us. When we stand near any passing train the train whistle initially increases and then it will decrease. This is known as Doppler Effect, named after Christian Doppler (1803 – 1853). Suppose a source produces sound with some frequency, we call it the as source frequency fs. If the source and an observer are at a fixed distance then the observer observes the sound with frequency f0. This is the same as the sound frequency produced by the source fs, i.e., f0 = fs. Hence, there is no difference in frequency, implying no Doppler effect is observed. 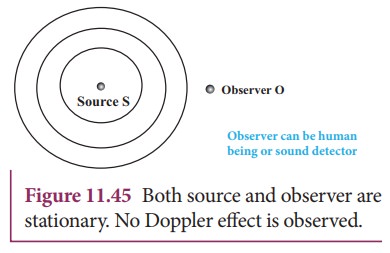 What happens if either source or an observer or both move?. Certainly, fo ≠ fs. That is, when the source and the observer are in relative motion with respect to each other and to the medium in which sound propagates, the frequency of the sound wave observed is different from the frequency of the source. This phenomenon is called Doppler Effect. The frequency perceived by the observer is known as apparent frequency. We can consider the following situations for the study of Doppler effect in sound waves

(a) Source and Observer: We can consider either the source or observer in motion or both are in motion. Further we can treat the motion to be along the line joining the source and the observer, or inclined at an angle θ to this line.

(c) Speed of Sound: We can also consider the case where speed of the source or an observer is greater or lesser than the speed of sound.

(i) Source in motion and Observer is at rest.

(a)  Source moves towards observer

(b)  Source moves away from the observer

(ii) Observer in motion and Source is at rest.

(a)  Observer moves towards Source

(b)  Observer receding away from the Source

(iii) Both are in motion

(a)  Source and Observer approach each other

(b)  Source and Observer recede from each other

Source in motion and the observer at rest

(a) Source moves towards the observer

Suppose a source S moves to the right (as shown in Figure 11.46) with a velocity vs and let the frequency of the sound waves produced by the source be fs. We assume the velocity of sound in a medium is v. The compression (sound wave front) produced by the source S at three successive instants of time are shown in the Figure 11.46. When S is at position x1 the compression is at C1. When S is at position x2, the compression is at C2 and similarly for x3 and C3. Assume that if C1 reaches the observer’s position A then at that instant C2 reaches the point B and C3 reaches the point C as shown in the Figure 11.46. It is obvious to see that the distance between compressions C2 and C3 is shorter than distance between C1 and C2. This means the wavelength decreases when the source S moves towards the observer O (since sound travels longitudinally and wavelength is the distance between two consecutive compressions). But frequency is inversely related to wavelength and therefore, frequency increases. 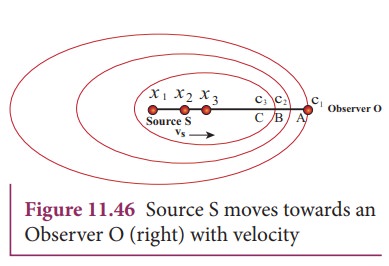 Since frequency is inversely proportional to wavelength, we have

Since, vs/v << 1, we use the binomial expansion and retaining only first order in vs/v , we get

(b) Source moves away from the observer: 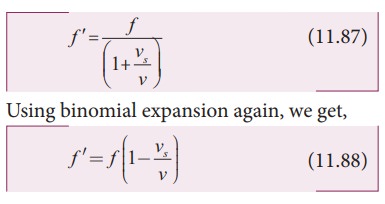 Observer in motion and source at rest

(a) Observer moves towards Source 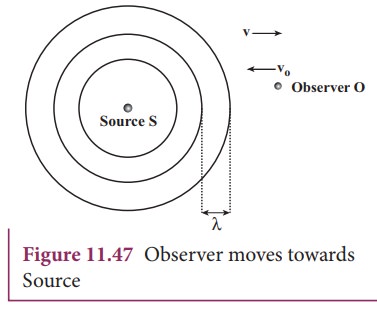 Let us assume that the observer O moves towards the source S with velocity vo. The source S is at rest and the velocity of sound waves (with respect to the medium) produced by the source is v. From the Figure 11.47, we observe that both vo and v are in opposite direction. Then, their relative velocity is vr  = v + v0. The wavelength of the sound wave is λ = v/f, which means the frequency observed by the observer O is f ′ = vr/λ . Then

(b) Observer recedes away from the Source

If the observer O is moving away (receding away) from the source S, then velocity v0 and v moves in the same direction. Therefore, their relative velocity is vr = v − v0. Hence, the frequency observed by the observer O is

Both are in motion

(a) Source and observer approach each other

Let vs and v0 be the respective velocities of source and observer approaching each other as shown in Figure 11.48. In order to calculate the apparent frequency observed by the observer, as a simple calculation, let us have a dummy (behaving as observer or source) in between the source and observer. Since the dummy is at rest, the dummy (observer) observes the apparent frequency due to approaching source as given in equation (11.85) as 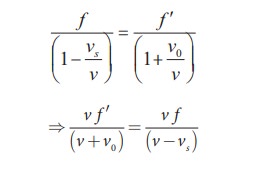 Hence, the apparent frequency as seen by the observer is

(b) Source and observer recede from each other

Here, we can derive the result as in the previous case. Instead of a detailed calculation, by inspection from Figure 11.49, we notice that the velocity of the source and the observer each point in opposite directions with respect to the case in (a) and hence, we substitute (vs → −vs) and (v0 → −v0) in equation (11.93), and therefore, the apparent frequency observed by the observer when the source and observer recede from each other is

Only the observer’s velocity is oppositely directed when compared to case (a). Therefore, substituting (v0 → −v0) in equation (11.93), we get

Only the source velocity is oppositely directed when compared to case (a). Therefore, substituting vs → −vs in equation (11.93), we get

Let ∆λ be the Doppler shift. Then ∆λ= v/c λ, where v is the velocity of the star. It may be noted that Doppler shift measures only the radial component (along the line of sight) of the relative velocity v.

A sound of frequency 1500 Hz is emitted by a source which moves away from an observer and moves towards a cliff at a speed of 6 ms-1.

(a) Calculate the frequency of the sound which is coming directly from the source.

(b) Compute the frequency of sound heard by the observer reflected off the cliff. Assume the speed of sound in air is 330 m s-1

(a) Source is moving away and observer is stationary, therefore, the frequency of sound heard directly from source is

(b) Sound is reflected from the cliff and reaches observer, therefore,

An observer observes two moving trains, one reaching the station and other leaving the station with equal speeds of 8 m s−1. If each train sounds its whistles with frequency 240 Hz, then calculate the number of beats heard by the observer.

(i) Source (train) is moving towards an observer:

Apparent frequency due to train arriving station is

(ii) Source (train) is moving away form an observer:

Apparent frequency due to train leaving station is