Intensity and Loudness of sound

Consider a source and two observers (listeners). The source emits sound waves which carry energy. The sound energy emitted by the source is same regardless of whoever measures it, i.e., it is independent of any observer standing in that region. But the sound received by the two observers may be different; this is due to some factors like sensitivity of ears, etc. To quantify such thing, we define two different quantities known as intensity and loudness of sound. 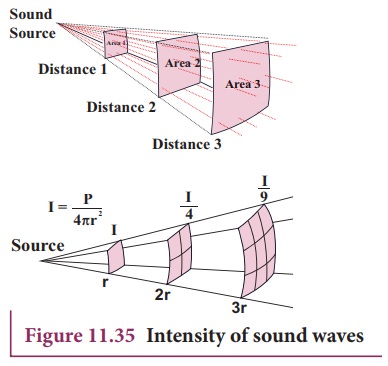 For a particular source (fixed source), the sound intensity is inversely proportional to the square of the distance from the source.

This is known as inverse square law of sound intensity.

the power output does not depend on the observer and depends on the baby. Therefore, 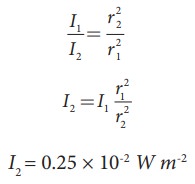 Two sounds with same intensities need not have the same loudness. For example, the sound heard during the explosion of balloons in a silent closed room is very loud when compared to the same explosion happening in a noisy market. Though the intensity of the sound is the same, the loudness is not. If the intensity of sound is increased then loudness also increases. But additionally, not only does intensity matter, the internal and subjective experience of “how loud a sound is” i.e., the sensitivity of the listener also matters here. This is often called loudness. That is, loudness depends on both intensity of sound wave and sensitivity of the ear (It is purely observer dependent quantity which varies from person to person) whereas the intensity of sound does not depend on the observer. The loudness of sound is defined as “the degree of sensation of sound produced in the ear or the perception of sound by the listener”.

Intensity and loudness of sound

According to Weber-Fechner’s law, “loudness (L) is proportional to the logarithm of the actual intensity (I) measured with an accurate non-human instrument”. This means that

If k = 1, then sound intensity level is measured in bel, in honour of Alexander Graham Bell. Therefore,

However, this is practically a bigger unit, so we use a convenient smaller unit, called decibel. Thus, decibel = 1/10 bel. Therefore, by multiplying and dividing by 10, we get

For practical purposes, we use logarithm to base 10 instead of natural logarithm, 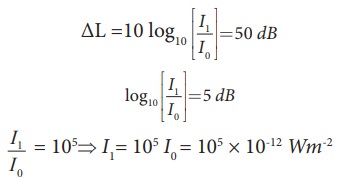