When sound wave passes from one medium to another medium, the following things can happen

(a)  Reflection of sound: If the medium is highly dense (highly rigid), the sound can be reflected completely (bounced back) to the original medium.

(b)  Refraction of sound: When the sound waves propagate from one medium to another medium such that there can be some energy loss due to absorption by the second medium.

In this section, we will consider only the reflection of sound waves in a medium when it experiences a harder surface. Similar to light, sound can also obey the laws of reflection, which states that

(i) The angle of incidence of sound is equal to the angle of reflection.

(ii) When the sound wave is reflected by a surface then the incident wave, reflected wave and the normal at the point of incidence all lie in the same plane.

Similar to reflection of light from a mirror, sound also reflects from a harder flat surface, This is called as specular reflection.

Specular reflection is observed only when the wavelength of the source is smaller than dimensions of the reflecting surface, as well as smaller than surface irregularities.

Reflection of sound through the plane surface 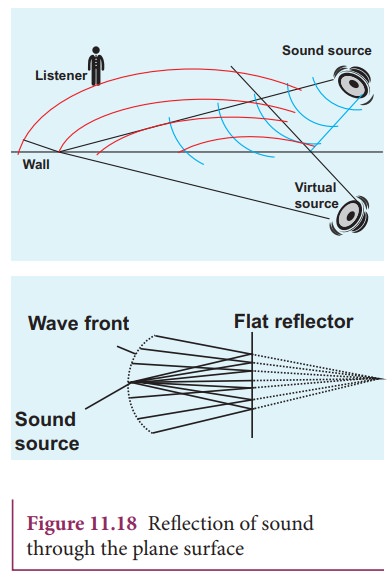 When the sound waves hit the plane wall, they bounce off in a manner similar to that of light. Suppose a loudspeaker is kept at an angle with respect to a wall (plane surface), then the waves coming from the source (assumed to be a point source) can be treated as spherical wave fronts (say, compressions moving like a spherical wave front). Therefore, the reflected wave front on the plane surface is also spherical, such that its centre of curvature (which lies on the other side of plane surface) can be treated as the image of the sound source (virtual or imaginary loud speaker) which can be assumed to be at a position behind the plane surface. These are shown in Figures 11.18, 11.19. 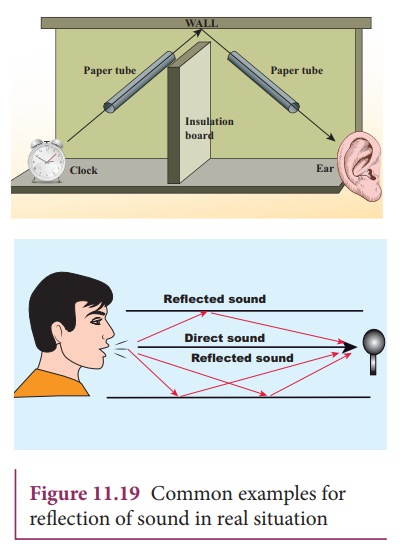 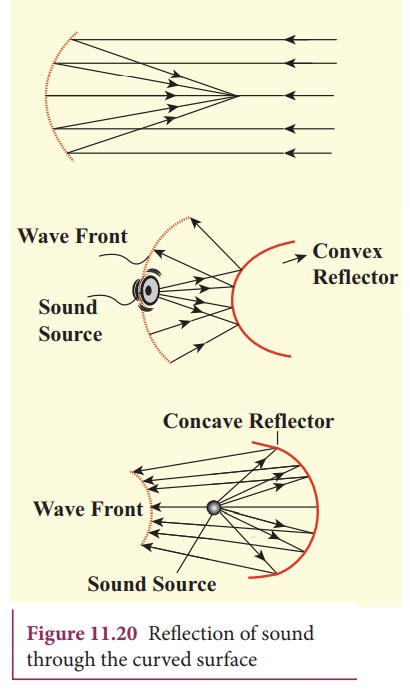 Reflection of sound through the curved surface

The behaviour of sound is different when it is reflected from different surfaces-convex or concave or plane. The sound reflected from a convex surface is spread out and so it is easily attenuated and weakened. Whereas, if it is reflected from the concave surface it will converge at a point and this can be easily amplified. The parabolic reflector (curved reflector) which is used to focus the sound precisely to a point is used in designing the parabolic mics which are known as high directional microphones. 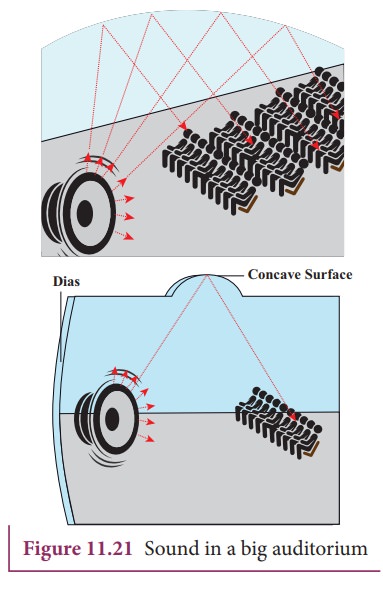 We know that any surface (smooth or rough) can absorb sound. For example, the sound produced in a big hall or auditorium or theatre is absorbed by the walls, ceilings, floor, seats etc. To avoid such losses, a curved sound board (concave board) is kept in front of the speaker, so that the board reflects the sound waves of the speaker towards the audience. This method will minimize the spreading of sound waves in all possible direction in that hall and also enhances the uniform distribution of sound throughout the hall. That is why a person sitting at any position in that hall can hear the sound without any disturbance.

(a) Stethoscope: It works on the principle of multiple reflections. 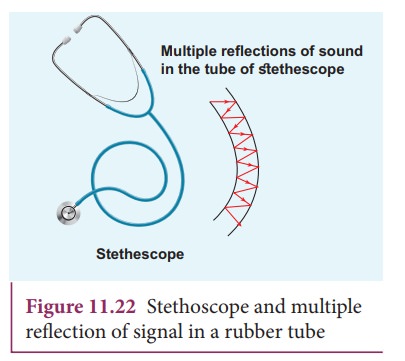 It consists of three main parts:

(i) Chest piece: It consists of a small disc-shaped resonator (diaphragm) which is very sensitive to sound and amplifies the sound it detects.

(ii) Ear piece: It is made up of metal tubes which are used to hear sounds detected by the chest piece.

(iii) Rubber tube: This tube connects both chest piece and ear piece. It is used to transmit the sound signal detected by the diaphragm, to the ear piece. The sound of heart beats (or lungs) or any sound produced by internal organs can be detected, and it reaches the ear piece through this tube by multiple reflections.

Scientists have estimated that we can hear two sounds properly if the time gap or time interval between each sound is (1/10) th of a second (persistence of hearing) i.e., 0.1 s. Then,

The minimum distance from a sound reflecting wall to hear an echo at 20°C is 17.2 meter.

(c) SONAR: SOund NAvigation and Ranging. Sonar systems make use of reflections of sound waves in water to locate the position or motion of an object. Similarly, dolphins and bats use the sonar principle to find their way in the darkness.

Suppose a man stands at a distance from a cliff and claps his hands. He receives an echo from the cliff after 4 second. Calculate the distance between the man and the cliff. Assume the speed of sound to be 343 m s-1.

Note: Classification of sound waves: Sound waves can be classified in three groups according to their range of frequencies:

Sound waves having frequencies between 20 Hz to 20,000 Hz (20kHz) are called audible waves. Human beings can hear these frequencies.