Equation of a plane progressive wave (or) Travelling Wave

Let us assume that the wave pulse created during this disturbance moves along positive x direction with constant speed v.

Equation of a plane progressive wave 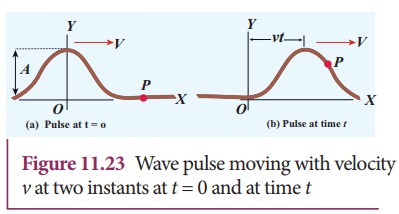 Suppose we give a jerk on a stretched string at time t = 0s. Let us assume that the wave pulse created during this disturbance moves along positive x direction with constant speed v as shown in Figure 11.23 (a). We can represent the shape of the wave pulse, mathematically as y = y(x, 0) = f(x) at time t = 0s. Assume that the shape of the wave pulse remains the same during the propagation. After some time t, the pulse moving towards the right and any point on it can be represented by x' (read it as x prime) as shown in Figure 11.23 (b). Then,

Similarly, if the wave pulse moves towards left with constant speed v, then y = f(x + vt). Both waves y = f(x + vt) and y = f(x − vt) will satisfy the following one dimensional differential equation known as the wave equation

where the symbol ∂ represent partial (read ∂y/∂x as partial y by partial x). Not all the solutions satisfying this differential equation can represent waves, because any physical acceptable wave must take finite values for all values of x and t. But if the function represents a wave then it must satisfy the differential equation. Since, in one dimension (one independent variable), the partial derivative with respect to x is the same as total derivative in coordinate x, we write

This can be extended to more than one dimension (two, three, etc.). Here, for simplicity, we focus only on the one dimensional wave equation.

Sketch y = x −a for different values of a. 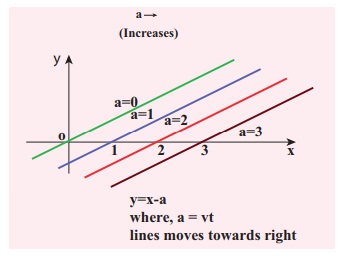 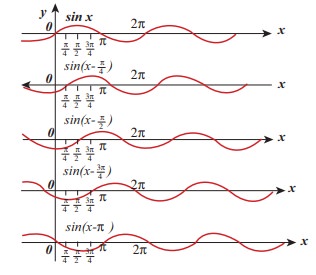 Check the dimensional of the wave y = sin(x−vt). If it is dimensionally wrong, write the above equation in the correct form.

Dimensionally it is not correct. we know that y = sin(x−vt) must be a dimensionless quantity but x−vt has dimension. The correct equation is y = sin (k x−ωt), where k and ω have the dimensions of inverse of length and inverse of time respectively. The sine functions and cosine functions are periodic functions with period 2π. Therefore, the correct expression is y = sin ([2π/λ]x, [2π/T]t) where λ and T are wavelength and time period, respectively.