Let us consider an ideal gas whose equation of state is

where, P is pressure, V is volume, T is temperature, n is number of mole and R is universal gas constant. For a given mass of a molecule, equation (11.26) can be written as

For a fixed mass m, density of the gas inversely varies with volume. i.e.,

where c is constant.

The speed of sound in air given in equation (11.25) can be written as

From the above relation we observe the following

(a) Effect of pressure :

For a fixed temperature, when the pressure varies, correspondingly density also varies such that the ratio (P/ρ) becomes constant.

(b) Effect of temperature :

the speed of sound varies directly to the square root of temperature in kelvin. 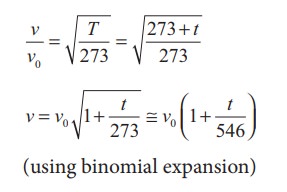 Let us consider two gases with different densities having same temperature and pressure. Then the speed of sound in the two gases are 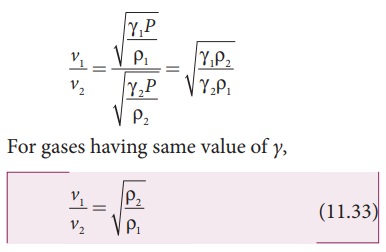 Thus the velocity of sound in a gas is inversely proportional to the square root of the density of the gas.

We know that density of moist air is 0.625 of that of dry air, which means the presence of moisture in air (increase in humidity) decreases its density. Therefore, speed of sound increases with rise in humidity. From equation (11.30)

Let ρ1, v1 and ρ2, v2 be the density and speeds of sound in dry air and moist air, respectively. Then 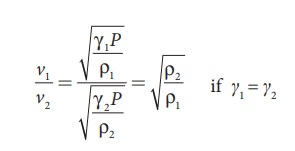 Since P is the total atmospheric pressure, it can be shown that

where p1 and p2 are the partial pressures of dry air and water vapour respectively. Then 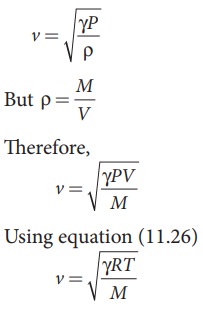 Where, R is the universal gas constant and M is the molecular mass of the gas. The speed of sound in nitrogen gas at 17°C is

Similarly, the speed of sound in oxygen gas at t in K is

Given that the value of γ is same for both the gases, the two speeds must be equal. Hence, equating equation (1) and (2), we get

Squaring on both sides and cancelling γ R term and rearranging, we get

Since the densities of oxygen and nitrogen is 16:14, 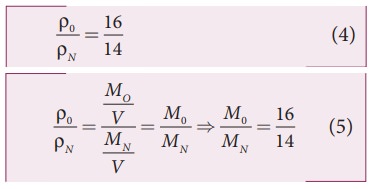 Substituting equation (5) in equation (3), we get