Magnetism is everywhere from tiny particles like electrons to the entire universe.

Magnets! no doubt, its behaviour will attract everyone (see Figure 3.1). The world enjoys its benefits, to lead a modern luxurious life. The study of magnets fascinated scientists around our globe for many centuries and even now, door for research on magnets is still open. Magnetism is everywhere from tiny particles like electrons to the entire universe. Historically the word ‘magnetism’ was derived from iron ore magnetite (Fe3 O4). In olden days, magnets were used as magnetic compass for navigation, magnetic therapy for treatment and also used in magic shows.

In this unit, basics of magnets and their properties are given. Later, how a current carrying conductor (here only steady current, not time-varying current is considered) behaves like a magnet is presented. From the activities performed in lower classes, we have noticed that the needle in a magnetic compass or freely suspended magnet comes to rest in a position which is approximately along the geographical north-south direction of the Earth. William Gilbert in 1600 proposed that Earth itself behaves like a gigantic powerful bar magnet. But this theory is not successful because the temperature inside the Earth is very high and so it will not be possible for a magnet to retain its magnetism.

Gover suggested that the Earth’s magnetic field is due to hot rays coming out from the Sun. These rays will heat up the air near equatorial region. Once air becomes hotter, it rises above and will move towards northern and southern hemispheres and get electrified. This may be responsible to magnetize the ferromagnetic materials near the Earth’s surface. Till date, so many theories have been proposed. But none of the theory completely explains the cause for the Earth’s magnetism.

(b) magnetic dip or inclination (I)

(c) the horizontal component of the Earth’s magnetic field (BH) The angle subtended by the Earth’s total magnetic field

Let BE be the net Earth’s magnetic field at a point P on the surface of the Earth. BE can be resolved into two perpendicular components. (i) At magnetic equator

The Earth’s magnetic field is parallel to the surface of the Earth (i.e., horizontal) which implies that the needle of magnetic compass rests horizontally at an angle of dip, I = 0o as shown in figure 3.6.

The Earth’s magnetic field is perpendicular to the surface of the Earth (i.e., vertical) which implies that the needle of magnetic compass rests vertically at an angle of dip, I = 90º as shown in Figure 3.7. Hence, The resultant magnetic field of the Earth is

Some basic terminologies and properties used in describing bar magnet. Consider a bar magnet as shown in Figure 3.8. Let qm be the pole strength (it is also called as magnetic charge) of the magnetic pole and let l be the distance between the geometrical center of bar magnet O and one end of the pole. The magnetic dipole moment is defined as the product of its pole strength and magnetic length. It is a vector quantity, denoted by

The magnitude of magnetic dipole moment is pm = 2qm l

Magnetic field is the region or space around every magnet within which its influence can be felt by keeping another magnet in that region. The magnetic field

at a point is defined as a force experienced by the bar magnet of unit pole strength.

The following are the properties of bar magnet (Figure 3.9)

1. A freely suspended bar magnet will always point along the north-south direction.

2. A magnet attracts another magnet or magnetic substances towards itself. The attractive force is maximum near the end of the bar magnet. When a bar magnet is dipped into iron filling, they cling to the ends of the magnet.

3. When a magnet is broken into pieces, each piece behaves like a magnet with poles at its ends.

4. Two poles of a magnet have pole strength equal to one another.

Let the magnetic moment of a bar magnet be

m whose magnetic length is d = 2l and pole strength is qm. Compute the magnetic moment of the bar magnet when it is cut into two pieces

(a) along its length

(b) perpendicular to its length.

(a) a bar magnet cut into two pieces along its length: 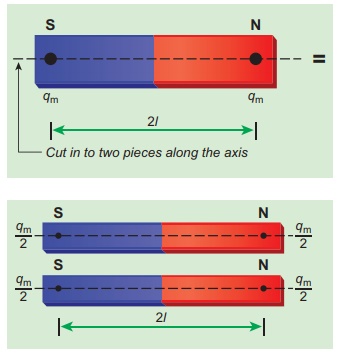 When the bar magnet is cut along the axis into two pieces, new magnetic pole strength is q′m = qm/2 but magnetic length does not change. So, the magnetic moment is

(b) a bar magnet cut into two pieces perpendicular to the axis: When the bar magnet is cut perpendicular to the axis into two pieces, magnetic pole strength will not change but magnetic length will be halved. So the magnetic moment is

Compute the magnetic length of a uniform bar magnet if the geometrical length of the magnet is 12 cm. Mark the positions of magnetic pole points.

Geometrical length of the bar magnet is 12 cm

In this figure, the dot implies the pole points.

3. Magnetic field lines never intersect each other. Otherwise, the magnetic compass needle would point towards two directions, which is not possible. where θ is the angle between B and A as shown in Figure 3.11. Suppose the magnetic field is not uniform over the surface, the equation (3.6) can be written as

The magnetic flux density can also be defined as the number of magnetic field lines crossing unit area kept normal to the direction of line of force. Its unit is Wb m-2 or tesla. The magnetic field of Earth has same value over the entire area of your school!

Magnetic field is said to be non-uniform if the magnitude or direction or both varies at all its points. Example: magnetic field of a bar magnet

Calculate the magnetic flux coming out from the surface containing magnetic dipole (say, a bar magnet) as shown in figure. Magnetic dipole is kept, the total flux emanating from the closed surface S is zero. So,

This is similar to Gauss’s law in electrostatics. (Refer unit 1)