The circulating electron in a loop is like current in a circular loop (since flow of charge is current).

Suppose an electron undergoes circular motion around the nucleus as shown in Figure 3.41. The circulating electron in a loop is like current in a circular loop (since flow of charge is current). The magnetic dipole moment due to current carrying circular loop is 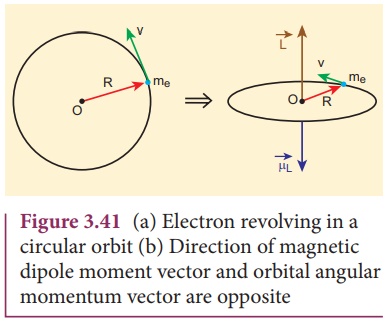 If T is the time period of an electron, the current due to circular motion of the electron is

where A = πR2 is the area of the circular loop. By definition, angular momentum of the electron about O is

The negative sign indicates that the magnetic moment and angular momentum are in opposite direction.

According to Neil’s Bohr quantization rule, the angular momentum of an electron moving in a stationary orbit is quantized, which means, 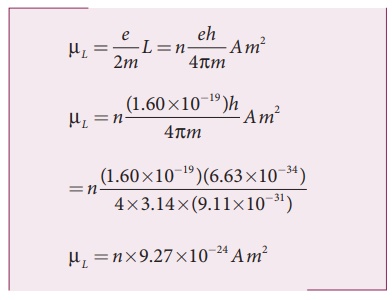 The minimum magnetic moment can be obtained by substituting n = 1,

Note: Bohr quantization rule will be discussed in unit 8 of second volume