Magnetism and Magnetic Effects of Electric Current: Questions and Answers

1. What is meant by magnetic induction?

The magnetic induction (total magnetic field) inside the specimen

is equal to the sum of the magnetic field

m due to the induced magnetism of the substance.

❖ The number of magnetic field lines crossing any area normally is defined as magnetic flux ϕB through the area.

❖ It is a scalar quantity.

The magnetic dipole moment is defined as the product of its pole strength and magnetic length. It is a vector quantity, denoted by

The magnitude of magnetic dipole moment is Pm = 2qml

SI unit is Am2

Where mA and mB are pole strengths of two poles and r is the distance between two magnetic poles.

5. What is magnetic susceptibility?

It is defined as the ratio of the intensity of magnetization (

) induced in the material due to the magnetizing field (

It is a dimensionless quantity.

Biot and Savart experimentally observed that the magnitude of magnetic field

at a point P at a distance r from the small elemental length taken on a conductor carrying current varies.

(i) directly as the strength of the current I

(ii) directly as the magnitude of the length element

(iii) directly as the sine of the angle (say, θ) between

7. What is magnetic permeability?

Ampere's law: The line integral of magnetic field over a closed loop is μo times net current enclosed by the loop.

Where Ienclosed is the net current linked by the closed loop. 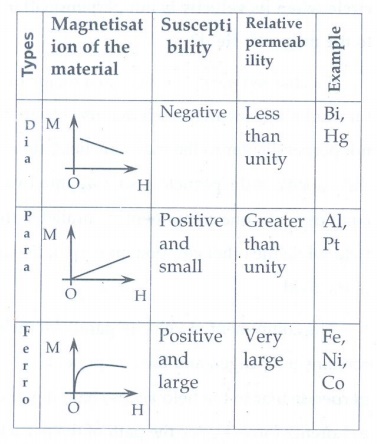 The phenomenon of lagging of magnetic induction behind the magnetizing field is called hysteresis. Hysteresis means ‘lagging behind'.

The angle between magnetic meridian at a point and geographical meridian is called the magnetic declination.

The angle subtended by the Earth's total magnetic field

with the horizontal direction in the magnetic meridian is called dip or magnetic inclination at that point.

12. What is resonance condition in cyclotron?

In cyclotron operation, the frequency f at which the positive ion circulates in the magnetic field must be equal to the constant frequency of the electrical oscillator fosc. This is called resonance condition in cyclotron.

One ampere is defined as that current when it is passed through each of the two infinity long parallel straight conductors kept at a distance of one meter apart in vacuum causes each conductor to experience a force of 2 x 10-7 newton per meter length of conductor.

15. Is an ammeter connected in series or parallel in a circuit? Why?

An ammeter connected in series in a circuit.

In an ammeter a shunt resistance is connected in parallel to galvanometer. Since, the shunt reistance is a very low resistance, the resistance of ammeter is also very small. So, when we connect the ammeter in series, the ammeter will not change appreciably the current in the circuit.

16. Explain the concept of velocity selector. 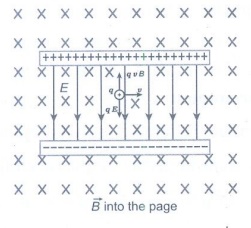 is maintained perpendicular to the direction of electric field.

, the net force on the particle is

For a positive charge, the electric force on the charge acts in downward direction where as the Lorentz force acts upwards. When these two forces balance each other, then

This means, for a given magnitude of

, the forces act only on the particle moving with particular speed v0 =E/B. This speed is independent of mass and charge.

By proper choice of electric and magnetic fields, the particle with particular speed can be selected. Such an arrangement of fields is called a velocity selector.

17. Why is the path of a charged particle not a circle when its velocity is not perpendicular to the magnetic field?

The component of velocity parallel to field remains unchanged and the component perpendicular to the field keeps changing due to Lorentz force. Hence the path of the particle is not a circle; it is a helical around the field lines.

18. Give the properties of dia, para and ferro magnetic materials?

The properties of Dia magnetic materials:

i) Magnetic susceptibility is negative.

The properties of para magnetic materials:

i) Magnetic susceptibility is positive and small.

iii) When it placed in a magnetic field, it attract the field lines.

The properties of ferro materials:

i) Magnetic susceptibility is positive and large

iii) When it is placed in magnetic field it strongly attract the field lines.

19. What happens to the domains in a ferromagnetic material in the presence of external magnetic field?

The domains in a ferromagnetic material in the presence of external magnetic field, two processes take place

(i) The domains having magnetic moments parallel to the field grow bigger in size.

(ii) The other domains (not parallel to field) are rotated so that they are aligned with the field.

As a result of these mechanisms, there is a strong net magnetization of the material in the direction of the applied field.

20. How is a galvanometer converted into an ammeter and a voltmeter.

❖ A galvanometer is converted into an ammeter by connecting a low resistance in parallel with the galvanometer.

❖ A galvanometer is converted into a voltmeter by connecting a high resistance in series with the galvanometer.

2. Deduce the relation for the magnetic induction at a point due to an infinitely long straight conductor carrying current.

3. Obtain a relation for the magnetic induction at a point along the axis of a circular coil carrying current.

4. Compute the torque experienced by a magnetic needle in a uniform magnetic field.

5. Calculate the magnetic induction at a point on the axial line of a bar magnet.

6. Obtain the magnetic induction at a point on the equatorial line of a bar magnet.

8. Discuss the working of cyclotron in detail.

9. What is tangent law? Discuss the working of Tangent Galvanometer in details.

10. Derive the expression for the torque on a current-carrying coil in a magnetic field.

11. Discuss the conversion of galvanometer into an ammeter and also a voltmeter.

12. Calculate the magnetic field inside and outside of the long solenoid using Ampere’s circuital law.

Derive the expression for magnetic field due to a long current carrying solenoid.

13. Deduce the expression for the force between two long parallel current carrying conductor.

15. Compare the properties of soft and hard ferromagnetic materials. 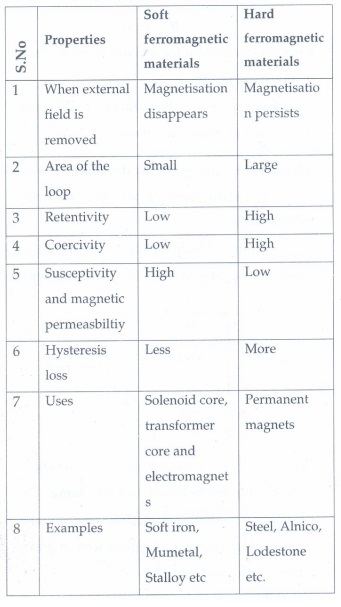 16. Drive the expression for the force on a current conductor in a magnetic field.