Tangent Galvanometer (Figure 3.21) is a device used to measure very small currents. It is a moving magnet type galvanometer. Its working is based on tangent law. 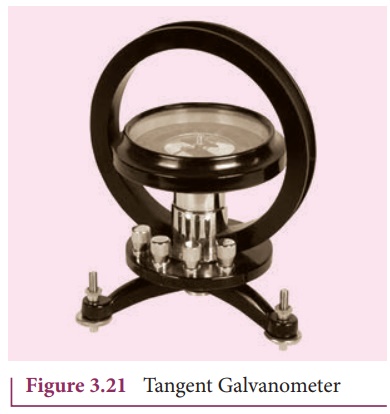 When a magnetic needle or magnet is freely suspended in two mutually perpendicular uniform magnetic fields, it will come to rest in the direction of the resultant of the two fields.

Let B be the magnetic field produced by passing current through the coil of the tangent Galvanometer and BH be the horizontal component of earth’s magnetic field. Under the action of two magnetic fields, the needle comes to rest making angle θ with BH, such that

Tangent Galvanometer (TG) consists of copper coil wounded on a non-magnetic circular frame. The frame is made up of brass or wood which is mounted vertically on a horizontal base table (turn table) with three levelling screws as shown in Figure 3.22. The TG is provided with two or more coils of different number of turns. Most of the equipment we use in laboratory consists of 2 turns, 5 turns and 50 turns which are of different thickness and are used for measuring currents of different strengths. 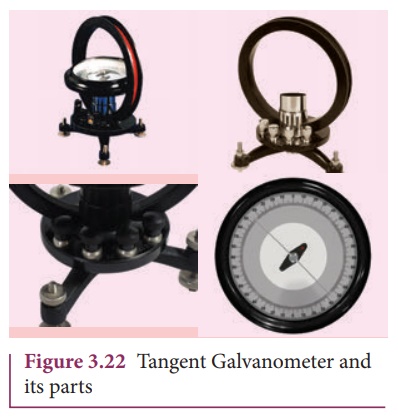 1.     All the nearby magnets and magnetic materials are kept away from the instrument.

2. Using spirit level, the levelling screws at the base are adjustedso that the small magnetic needle is exactly horizontal and also coil (mounted on the frame) is exactly vertical.

3. The plane of the coil is kept parallel to the small magnetic needle by rotating the coil about its vertical axis. So, the coil remains in magnetic meridian. 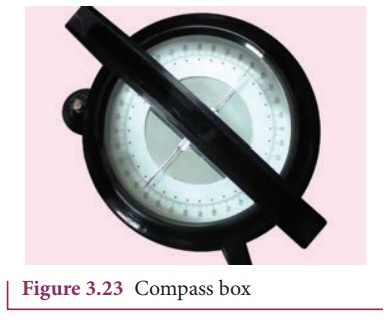 The circuit connection for Tangent Galvanometer (TG) experiment is shown in Figure 3.24. When no current is passed through the coil, the small magnetic needle lies along horizontal component of Earth’s magnetic field. When the circuit is switched ON, the electric current will pass through the circular coil and produce magnetic field. The magnetic field produced due to the circulatory electric current is discussed (in section 3.8.3). Now there are two fields which are acting mutually perpendicular to each other. They are:

(1) the magnetic field (B) due to the electric current in the coil acting normal to the plane of the coil. 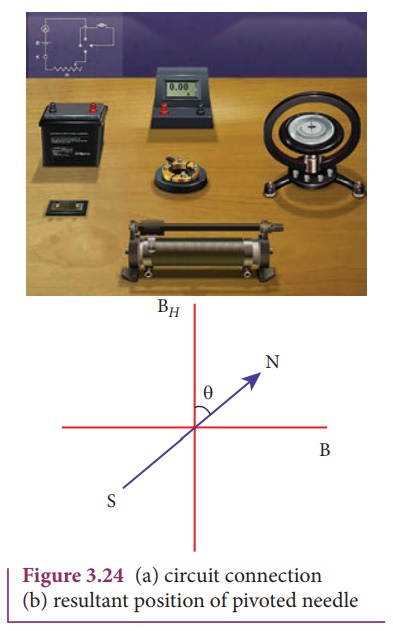 Because of these crossed fields, the pivoted magnetic needle deflects through an angle θ. From tangent law (equation 3.29),

When an electric current is passed through a circular coil of radius R having N turns, the magnitude of magnetic field at the center is