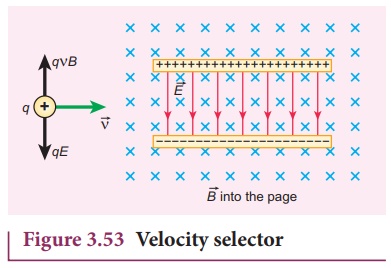 such that velocity is not perpendicular to the magnetic field. Then the path of the particle is a helix. The Lorentz force on the charged particle moving in a uniform magnetic field can be balanced by Coulomb force by proper arrangement of electric and magnetic fields.

For illustration, consider an experimental arrangement as shown in Figure 3.53. In the region of space between parallel plates of a capacitor (which produces uniform electric field), uniform magnetic field is maintained perpendicular to the direction of electric field. Suppose a charged particle enters this space from the left side as shown, the net force on the particle is

For a positive charge, the electric force on the charge acts in downward direction whereas the Lorentz force acts upwards. When these two forces balance one another, then

This means, for a given magnitude of

- field, the forces act only for the particle moving with particular speed v0 = E/B . This speed is independent of mass and charge.

If the charge enters into the crossed fields with velocity v, other than vo, it results in any of the following possibilities (Table 3.4). 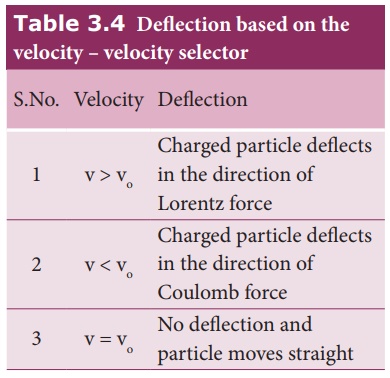 So by proper choice of electric and magnetic fields, the particle with particular speed can be selected. Such an arrangement of fields is called a velocity selector.

Since the speed v200 > v, the electron is deflected towards direction of Lorentz force. So, in order to have null deflection, the potential, we have to supply is