1. Force on a moving charge in a magnetic field: Solved Example Problems

Velocity of the particle is

(a) Magnetic field is along positive  y - direction, this implies, 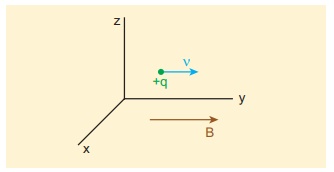 So, no force acts on the particle when it moves along the direction of magnetic field.

(b) Magnetic field points in positive z - direction, this implies, 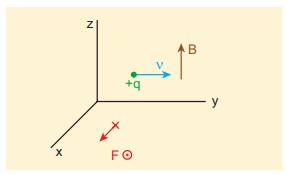 Therefore, the magnitude of the Lorentz force is qvB and direction is along positive x - direction.

(c) Magnetic field is in zy - plane and making an angle θ with the velocity of the particle, which implies 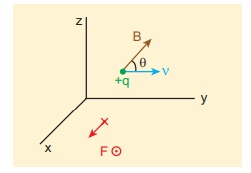 . Calculate the angle between Lorentz force and velocity of the charged particle and also interpret the result.

For a charged particle moving on a magnetic field,

The work done by the magnetic field is

This means that Lorentz force do no work on the particle. From work kinetic energy theorem, (Refer section 4th chapter, XI th standard Volume I)

2. Motion of a charged particle in a uniform magnetic field: Solved Example Problems

An electron moving perpendicular to a uniform magnetic field 0.500 T undergoes circular motion of radius 2.80 mm. What is the speed of electron?

A proton moves in a uniform magnetic field of strength 0.500 T magnetic field is directed along the x-axis. At initial time, t = 0 s, the proton has velocity

(a) At initial time, what is the acceleration of the proton. 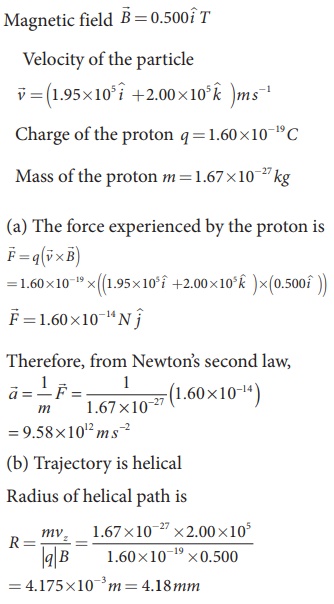 Pitch of the helix is the distance travelled along x-axis in a time T, which is P = vx T 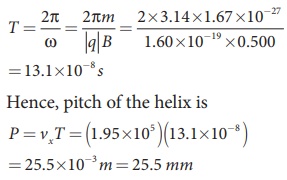 The proton experiences appreciable acceleration in the magnetic field, hence the pitch of the helix is almost six times greater than the radius of the helix. 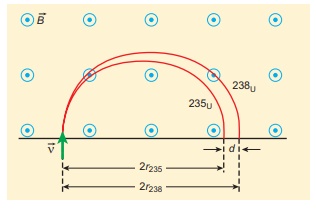 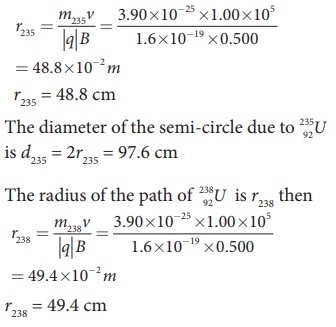 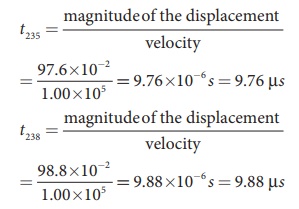 Note that even though the difference between mass of two isotopes are very small, this arrangement helps us to convert this small difference into an easily measurable distance of separation. This arrangement is known as mass spectrometer. A mass spectrometer is used in many areas in sciences, especially in medicine, in space science, in geology etc. For example, in medicine, anaesthesiologists use it to measure the respiratory gases and biologist use it to determine the reaction mechanisms in photosynthesis.

Since the speed v200 > v, the electron is deflected towards direction of Lorentz force. So, in order to have null deflection, the potential, we have to supply is

Suppose a cyclotron is operated to accelerate protons with a magnetic field of strength 1 T. Calculate the frequency in which the electric field between two Dees could be reversed.

A metallic rod of linear density is 0.25 kg m-1 is lying horizontally on a smooth inclined plane which makes an angle of 45º with the horizontal. The rod is not allowed to slide down by flowing a current through it when a magnetic field of strength 0.25 T is acting on it in the vertical direction. Calculate the electric current flowing in the rod to keep it stationary. 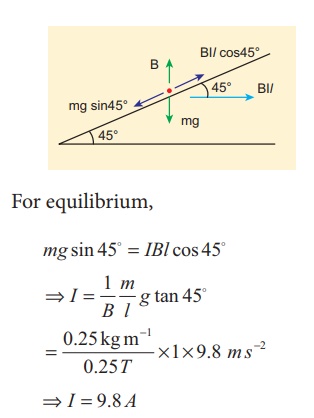 So, we need to supply current of 9.8 A to keep the metallic rod stationary.