Moving coil galvanometer is a device which is used to indicate the flow of current in an electrical circuit.

Moving coil galvanometer is a device which is used to indicate the flow of current in an electrical circuit.

When a current carrying loop is placed in a uniform magnetic field it experiences a torque.

A moving coil galvanometer consists of a rectangular coil PQRS of insulated thin copper wire. The coil contains a large number of turns wound over a light metallic frame. A cylindrical soft-iron core is placed symmetrically inside the coil as shown in Figure 3.66. The rectangular coil is suspended freely between two pole pieces of a horse-shoe magnet. 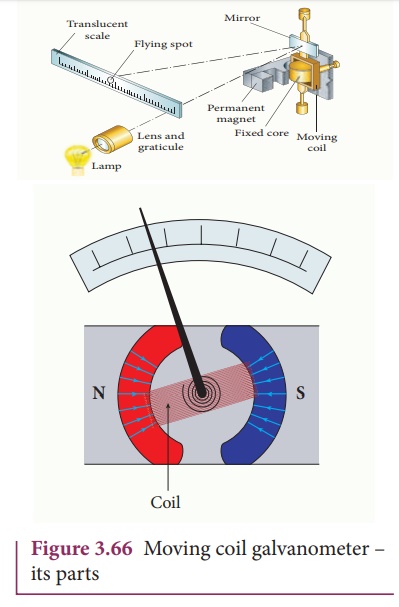 The upper end of the rectangular coil is attached to one end of fine strip of phosphor bronze and the lower end of the coil is connected to a hair spring which is also made up of phosphor bronze. In a fine suspension strip W, a small plane mirror is attached in order to measure the deflection of the coil with the help of lamp and scale arrangement. The other end of the mirror is connected to a torsion head T. In order to pass electric current through the galvanometer, the suspension strip W and the spring S are connected to terminals. 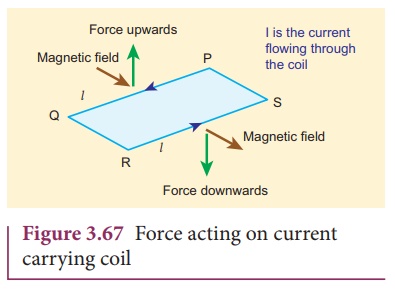 The horse-shoe magnet has hemi - spherical magnetic poles which produces a radial magnetic field. Due to this radial field, the sides QR and SP are always parallel to to the B-field (magnetic field) and experience no force. The sides PQ and RS are always parallel to the B-field and experience force and due to this, torque is produced. 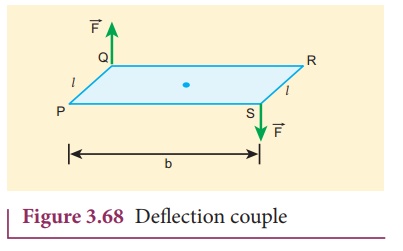 For single turn, the deflection couple as shown in Figure 3.68 is

since, area of the coil A = lb

For coil with N turns, we get

Due to this deflecting torque, the coil gets twisted and restoring torque (also known as restoring couple) is developed. Hence the magnitude of restoring couple is proportional to the amount of twist θ (Refer Unit 10 of Std. XI Physics).Thus

where K is the restoring couple per unit twist or torsional constant of the spring.

At equilibrium, the deflection couple is equal to the restoring couple. Therefore by comparing equation (3.69) and (3.70), we get

where, G = K/NAB = is called galvanometer constant or current reduction factor of the galvanometer.

Figure of merit of a galvanometer

It is defined as the current which produces a deflection of one scale division in the galvanometer.

Sensitivity of a galvanometer

The galvanometer is said to be sensitive if it shows large scale deflection even though a small current is passed through it or a small voltage is applied across it.

Current sensitivity: It is defined as the deflection produced per unit current flowing through it.

The current sensitivity of a galvanometer can be increased

(2) the magnetic induction B

Voltage sensitivity: It is defined as the deflection produced per unit voltage applied across it.

where Rg is the resistance of galvanometer.

(a) Find its current sensitivity in degree per micro - ampere.

(b) Calculate the voltage sensitivity of the galvanometer for it to have full scale deflection of 50 divisions for 25 mV.

(c) Compute the resistance of the galvanometer.

The number of turns of the coil is 5 turns 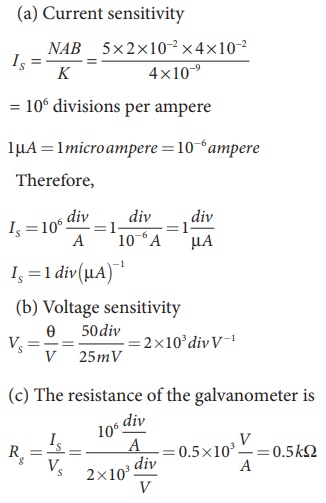 The resistance of a moving coil galvanometer is made twice its original value in order to increase current sensitivity by 50%. Will the voltage sensitivity change? If so, by how much?.

Voltage sensitivity is Vs = Is/R

Increase in current sensitivity is 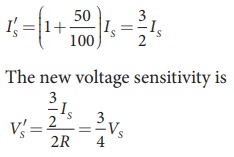