1. The following graphs represent the current versus voltage and voltage versus current for the six conductors A,B,C,D,E and F. Which conductor has least resistance and which has maximum resistance? 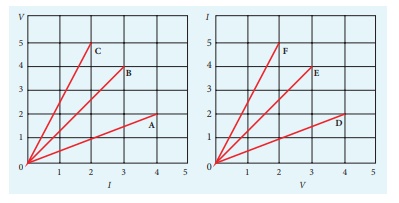 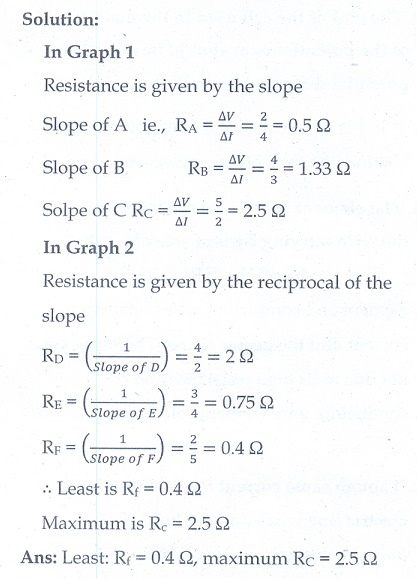 2. Lightning is very good example of natural current. In typical lightning, there is 109 J energy transfer across the potential difference of 5 × 107 V during a time interval of 0.2 s. Using this information, estimate the following quantities (a) total amount of charge transferred between cloud and ground (b) the current in the lightning bolt (c) the power delivered in 0.2 s. 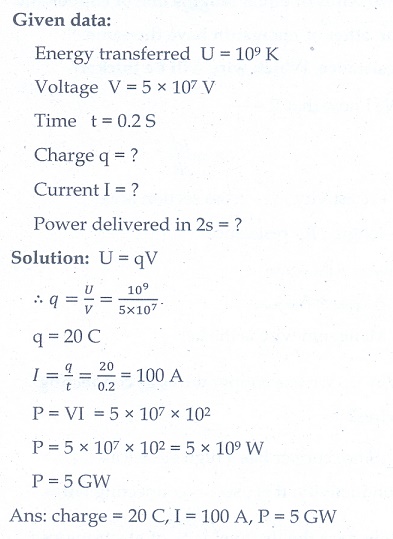 3. A copper wire of 10-6 m2 area of cross section, carries a current of 2 A. If the number of electrons per cubic meter is 8 × 1028, calculate the current density and average drift velocity. 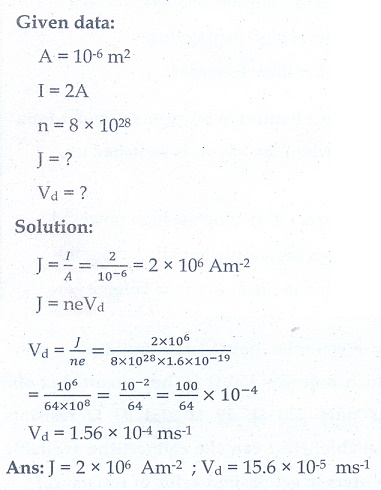 4. The resistance of a nichrome wire at 0º C is 10 Ω. If its temperature coefficient of resistance is 0.004/ºC, find its resistance at boiling point of water. Comment on the result. 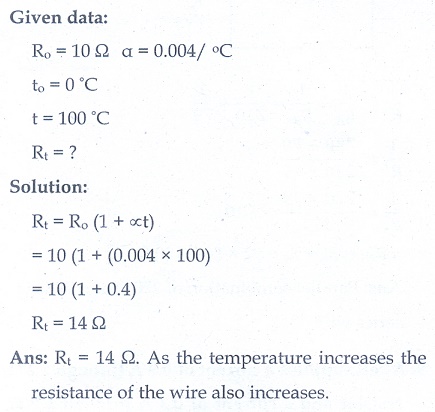 Ans: RT= 14 Ω. As the temperature increases the resistance of the wire also increases.

5. The rod given in the figure is made up of two different materials. 6. Three identical lamps each having a resistance R are connected to the battery of emf as shown in the figure. 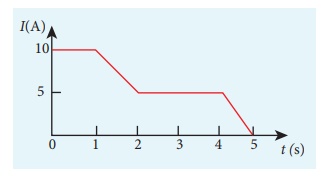 8. An electronics hobbyist is building a radio which requires 150 Ω in her circuit, but she has only 220 Ω, 79 Ω and 92 Ω resistors available. How can she connect the available resistors to get desired value of resistance? 10. Calculate the currents in the following circuit. 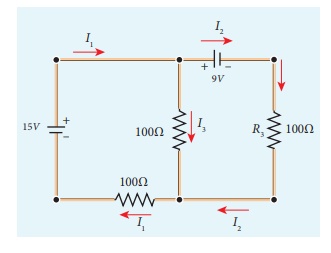 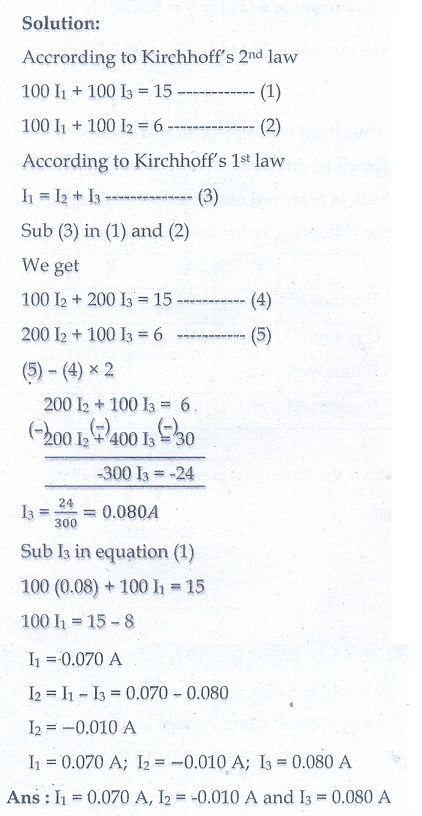 11. A potentiometer wire has a length of 4 m and resistance of 20 Ω. It is connected in series with resistance of 2980 Ω and a cell of emf 4 V. Calculate the potential along the wire. 12. Determine the current flowing through the galvanometer (G) as shown in the figure. 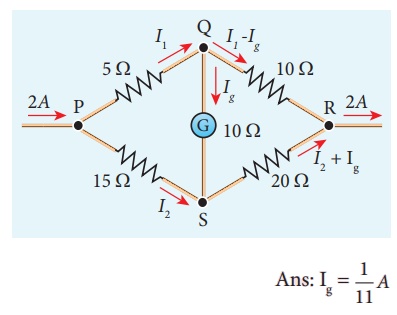 13. Two cells each of 5V are connected in series across a 8 Ω resistor and three parallel resistors of 4 Ω, 6 Ω and 12 Ω. Draw a circuit diagram for the above arrangement. Calculate i) the current each resistor 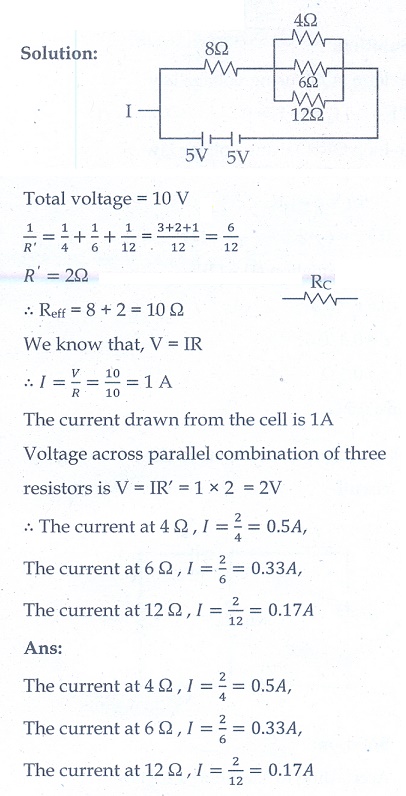 14. Four light bulbs P, Q, R, S are connected in a circuit of unknown arrangement. When each bulb is removed one at a time and replaced, the following behavior is observed. 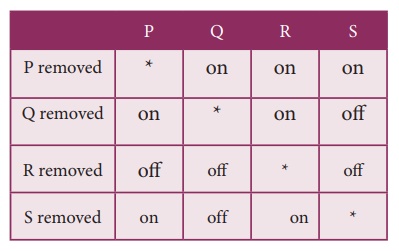 Draw the circuit diagram for these bulbs. 15. In a potentiometer arrangement, a cell of emf 1.25 V gives a balance point at 35 cm length of the wire. If the cell is replaced by another cell and the balance point shifts to 63 cm, what is the emf of the second cell? Compute the current in the wire if a charge of 120 C is flowing through a copper wire in 1 minute.

The current (rate of flow of charge) in the wire is

If an electric field of magnitude 570 N C-1, is applied in the copper wire, find the acceleration experienced by the electron.

A potential difference across 24 Ω resistor is 12 V. What is the current through the resistor? 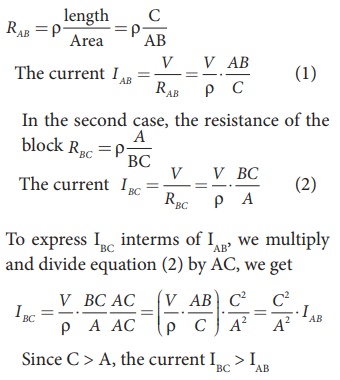 Calculate the equivalent resistance for the circuit which is connected to 24 V battery and also find the potential difference across 4 Ω and 6 Ω resistors in the circuit. 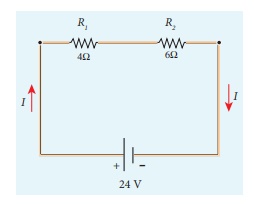 Since the resistors are connected in series, the effective resistance in the circuit

Calculate the equivalent resistance in the following circuit and also find the current I, I1 and I2 in the given circuit. 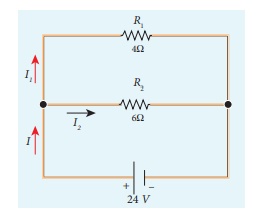 Since the resistances are connected in parallel, therefore, the equivalent resistance in the circuit is

The resistors are connected in parallel, the potential (voltage) across each resistor is the same.

The current I is the total of the currents in the two branches. Then,

When two resistances connected in series and parallel their equivalent resistances are 15 Ω and 56/15 Ω respectively. Find the individual resistances. The above equation can be solved using factorisation.

Calculate the equivalent resistance between A and B in the given circuit.

Five resistors are connected in the configuration as shown in the figure. Calculate the equivalent resistance between the points a and b. 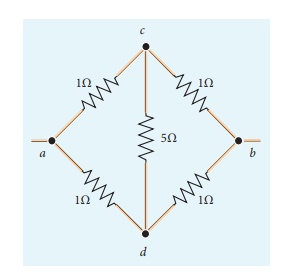 To find the equivalent resistance between the points a and b, we assume that current is entering the junction a. Since all the resistances in the outside loop are the same (1Ω), the current in the branches ac and ad must be equal. So the electric potential at the point c and d is the same hence no current flows into 5 Ω resistance. It implies that the 5 Ω has no role in determining the equivalent resistance and it can be removed. So the circuit is simplified as shown in the figure.