The two dissimilar metals connected to form two junctions is known as thermocouple.

Seebeck discovered that in a closed circuit consisting of two dissimilar metals, when the junctions are maintained at different temperatures an emf (potential difference) is developed. The current that flows due to the emf developed is called thermoelectric current. The two dissimilar metals connected to form two junctions is known as thermocouple (Figure 2.35). 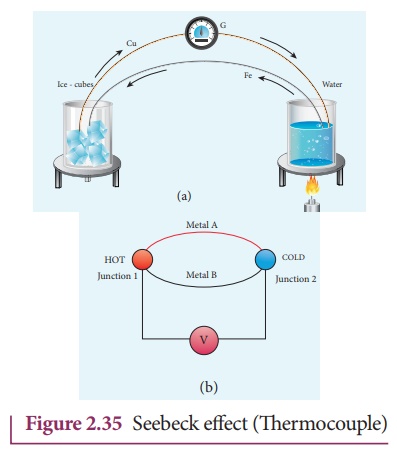 If the hot and cold junctions are interchanged, the direction of current also reverses. Hence the effect is reversible.

The magnitude of the emf developed in a thermocouple depends on (i) the nature of the metals forming the couple and (ii) the temperature difference between the junctions.

2. This effect is utilized in automobiles as automotive thermoelectric generators for increasing fuel efficiency.

3. Seebeck effect is used in thermocouples and thermopiles to measure the temperature difference between the two objects.