When a potential difference is applied by the battery across the ends of the conductor, the free electrons drift towards the positive terminal of the battery, producing a net electric current.

When a potential difference is applied by the battery across the ends of the conductor, the free electrons drift towards the positive terminal of the battery, producing a net electric current. This is easily understandable from the analogy given in the Figure 2.1. 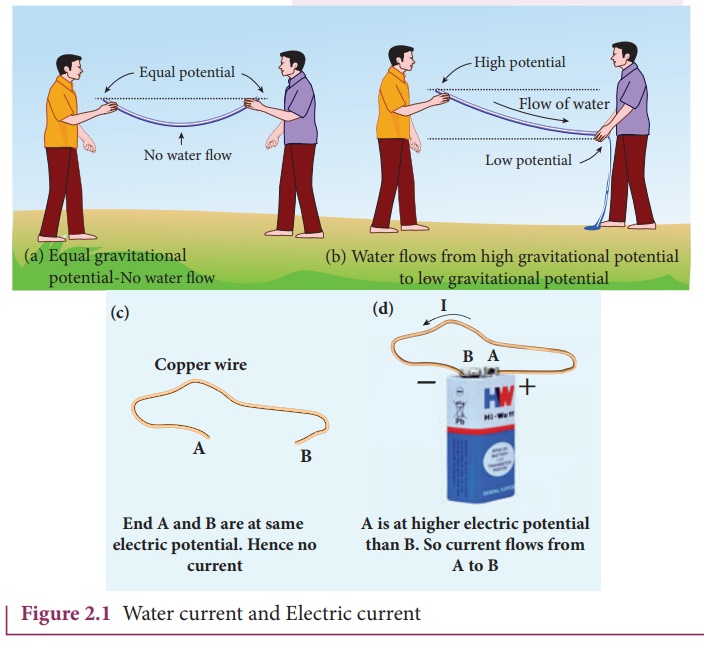 The electric current in a conductor is defined as the rate of flow of charges through a given cross-sectional area A. It is shown in the Figure 2.2. 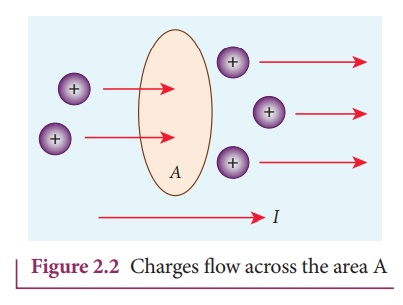 If a net charge Q passes through any cross section of a conductor in time t, then the current is defined as I = Q/t . But charge flow is not always constant. Hence current can more generally be defined as

Where ∆Q is the amount of charge that passes through the conductor at any cross section during the time interval ∆t. If the rate at which charge flows changes in time, the current also changes. The instantaneous current I is defined as the limit of the average current, as  Δ t → 0

The SI unit of current is the ampere (A)

That is, 1A of current is equivalent to 1 Coulomb of charge passing through a perpendicular cross section in 1second. The electric current is a scalar quantity.

Compute the current in the wire if a charge of 120 C is flowing through a copper wire in 1 minute.

The current (rate of flow of charge) in the wire is 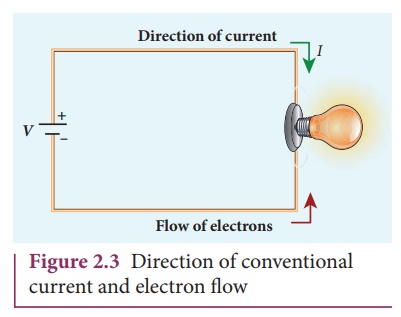 In an electric circuit, arrow heads are used to indicate the direction of flow of current. By convention, this flow in the circuit should be from the positive terminal of the battery to the negative terminal. This current is called the conventional current or simply current and is in the direction in which a positive test charge would move. In typical circuits the charges that flow are actually electrons, from the negative terminal of the battery to the positive. As a result, the flow of electrons and the direction of conventional current points in opposite direction as shown in Figure 2.3. Mathematically, a transfer of positive charge is the same as a transfer of negative charge in the opposite direction.

Suppose a potential difference is set across  the  conductor  by  connecting  a battery, an electric field 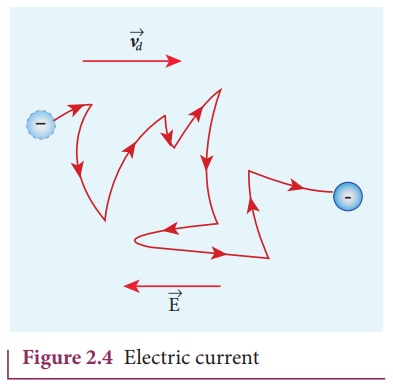 This velocity is called drift velocity

d . The drift velocity is the average velocity acquired by the electrons inside the conductor when it is subjected to an electric field. The average time between successive collisions is called the mean free time denoted by τ. The acceleration

experienced by the electron in an electric field 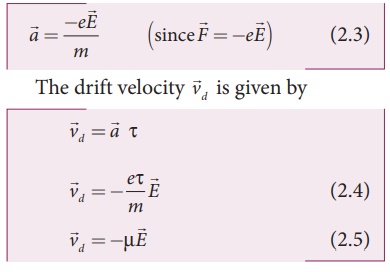 Here µ = eτ/m is the  mobility  of  the electron and it is defined as the magnitude of the drift velocity per unit electric field.

The SI unit of mobility is m2/Vs.

If an electric field of magnitude 570 N C-1, is applied in the copper wire, find the acceleration experienced by the electron.

(ii) We often use the phrases like ‘charging the battery in my mobile’ and ‘my mobile phone battery has no charge’ etc. These sentences are not correct. 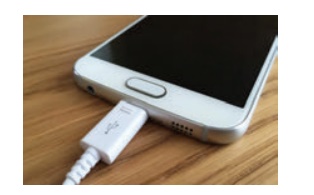 applied from right to left. Suppose there are n electrons per unit volume in the conductor and assume that all the electrons move with the same drift velocity 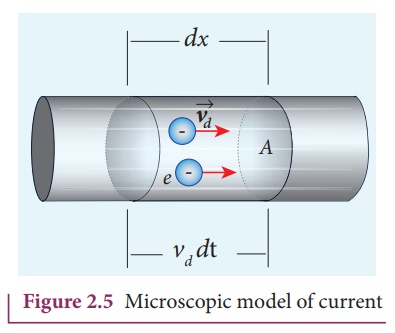 Since A is the area of cross section of the conductor, the electrons available in the volume of length dx is = volume × number per unit volume

The current density ( J ) is defined as the current per unit area of cross section of the conductor. 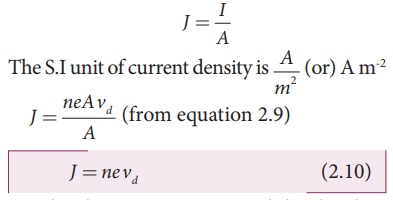 The above expression is valid only when the direction of the current is perpendicular to the area A. In general, the current density is a vector quantity and it is given by

where σ = ne2τ /m is called conductivity. The equation 2.12 is called microscopic form of ohm’s law.

The inverse of conductivity is called resistivity (ρ) [Refer section 2.2.1].