Energy and Power in Electrical Circuits

When a battery is connected between the ends of a conductor, a current is established.

ENERGY AND POWER IN ELECTRICAL CIRCUITS

When a battery is connected between the ends of a conductor, a current is established. The battery is transporting energy to the device which is connected in the circuit. Consider a circuit in which a battery of voltage V is connected to the resistor as shown in Figure 2.15. 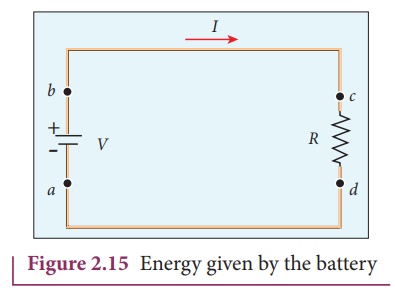 Since the electric current I = dQ/dt .

This expression gives the power delivered by the battery to any electrical system, where I is the current passing through it and V is the potential difference across it. The SI unit of electrical power is watt (1W = 1 J s-1). Commercially, the electrical bulbs used in houses come with the power and voltage rating of 5W-220V, 30W-220V, 60W-220V etc. (Figure 2.16). 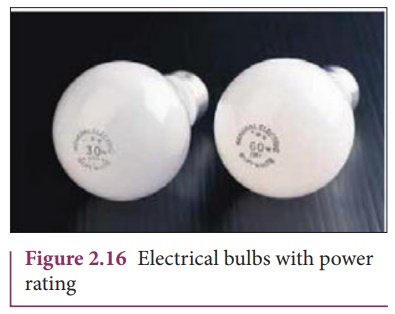 Using Ohm’s law, power delivered to the resistance R is expressed in other forms

The total energy used by any device is obtained by multiplying the power and duration of the time when it is ON. If the power is in watts and the time is in seconds, the energy will be in joules. In practice, electrical energy is measured in kilowatt hour (kWh). 1 kWh is known as 1 unit of electrical energy.

A battery of voltage V is connected to 30 W bulb and 60 W bulb as shown in the figure. (a) Identify brightest bulb (b) which bulb has greater resistance? (c) Suppose the two bulbs are connected in series, which bulb will glow brighter? 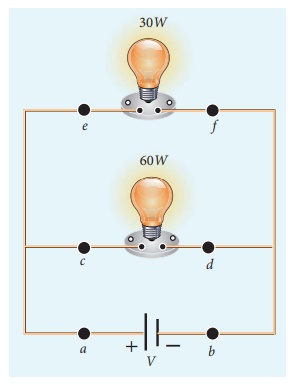 (a) The power delivered by the battery P = VI. Since the bulbs are connected in parallel, the voltage drop across each bulb is the same. If the voltage is kept fixed, then the power is directly proportional to current (P ∝ I). So 60 W bulb draws twice as much as current as 30 W and it will glow brighter then others.

To check which bulb will be fused, the voltage drop across each bulb has to be calculated.

The resistance of a bulb, 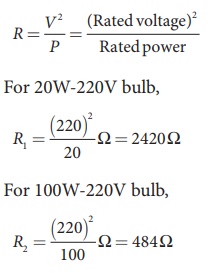 The voltage drop across the 20W bulb is

The voltage drop across the 100W bulb is