The meter bridge is another form of Wheatstone’s bridge.

The meter bridge is another form of Wheatstone’s bridge. It consists of a uniform manganin wire AB of one meter length. This wire is stretched along a meter scale on a wooden board between two copper strips C and D. Between these two copper strips another copper strip E is mounted to enclose two gaps G1 and G2 as shown in Figure 2.26. An unknown resistance P is connected in G1 and a standard resistance Q is connected in G2. A jockey (conducting wire) is connected to the terminal E on the central copper strip through a galvanometer (G) and a high resistance (HR). The exact position of jockey on the wire can be read on the scale. A Lechlanche cell and a key (K) are connected across the ends of the bridge wire. 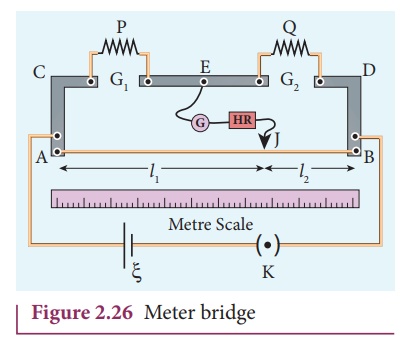 The position of the jockey on the wire is adjusted so that the galvanometer shows zero deflection. Let the point be J. The lengths AJ and JB of the bridge wire now replace the resistance R and S of the Wheatstone’s bridge. Then

where R′ is the resistance per unit length of wire

The bridge wire is soldered at the ends of the copper strips. Due to imperfect contact, some resistance might be introduced at the contact. These are called end resistances. This error can be eliminated, if another set of readings are taken with P and Q interchanged and the average value of P is found.

By rearranging the above equation, we get

If P is the unknown resistance equation (2.57) becomes,

In a meter bridge with a standard resistance of 15 Ω in the right gap, the ratio of balancing length is 3:2. Find the value of the other resistance. 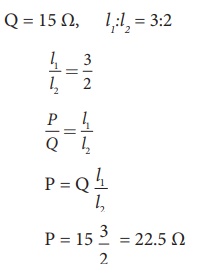 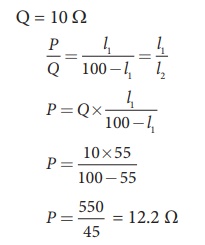