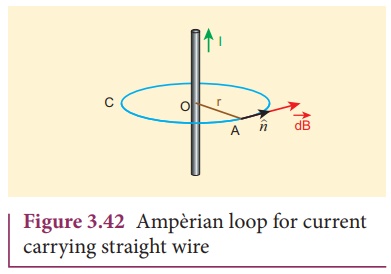 Consider a straight conductor of infinite length carrying current I and the direction ofmagnetic field lines is shown in Figure 3.42. Since the wire is geometrically cylindrical in shape and symmetrical about its axis, we construct an Ampèrian loop in the form of a circular shape at a distance r from the centre of the conductor as shown in Figure 3.42. From the Ampère’s law, we get

is the line element along the amperian loop (tangent to the circular loop). Hence, the angle between magnetic field vector and line element is zero. Therefore,

For a circular loop, the circumference is 2πr, which implies, 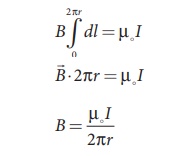 In vector form, the magnetic field is

where n is the unit vector along the tangent to the Ampèrian loop as shown in the Figure 3.42. This perfectly agrees with the result obtained from Biot-Savart’s law as given in equation (3.39).

Compute the magnitude of the magnetic field of a long, straight wire carrying a current of 1A at distance of 1m from it. Compare it with Earth’s magnetic field.

So, Bstraightwire is one hundred times smaller than BEarth.