When the speed of the moving fluid exceeds the critical speed, Vc the motion becomes turbulent.

When the speed of the moving fluid exceeds the critical speed, vc the motion becomes turbulent. In this case, the velocity changes both in magnitude and direction from particle to particle and hence the individual particles do not move in a streamlined path. Hence, the path taken by the particles in turbulent flow becomes erratic and whirlpool-like circles called eddy current or eddies (Figure 7.17 (a) and (b)). The flow of water just behind a boat or a ship and the air flow behind a moving bus are a few examples of turbulent flow. 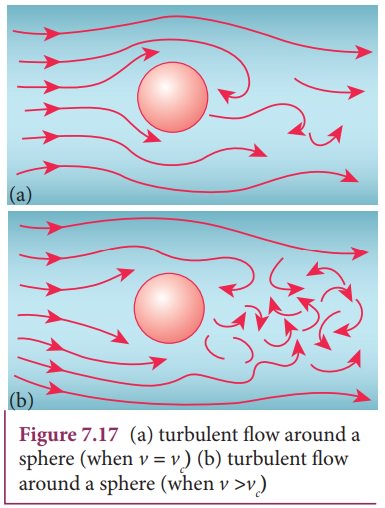 The distinction between the two types of motion can be easily demonstrated by injecting a jet of ink axially in a wide tube through which water flows. When the velocity of the fluid is small the ink will move in a straight line path. Conversely, when the velocity is increased beyond a certain value, the ink will spread out showing the disorderliness and hence the motion becomes turbulent. The zig-zag motion results in the formation of eddy currents and as a consequence, much energy is dissipated.