The distance between the atoms or molecules determines whether it exist in the solid, liquid or gaseous state.

Even though various forms of matter such as solid food, liquids like water, and the air that we breathe are familiar in the day – to – day lifestyle for the past several thousand years, the microscopic understanding of solids, liquids, and gases was established only in the 20th century. In the universe, everything is made up of atoms. If so, why the same materials exist in three states? For example, water exists in three forms as solid ice, liquid water, and gaseous steam. Interestingly ice, water, and steam are made up of same types of molecules; two hydrogen atoms and one oxygen atom form a water molecule. Physics helps us to explore this beauty of nature at the microscopic level. The distance between the atoms or molecules determines whether it exist in the solid, liquid or gaseous state.

In solids, atoms or molecules are tightly fixed. In the solid formation, atoms get bound together through various types of bonding. Due to the interaction between the atoms, they position themselves at a particular interatomic distance. This position of atoms in this bound condition is called their mean positions.

When the solid is not given any external energy such as heat, it will remain as a solid due to the bonding between atoms. When heated, atoms of the solid receive thermal energy and vibrate about their mean positions. When the solid is heated above its melting point, the heat energy will break the bonding between atoms and eventually the atoms receive enough energy and wander around. Here also the intermolecular (or interatomic) forces are important, but the molecules will have enough energy to move around, which makes the structure mobile.

When a liquid is heated at constant pressure to its boiling point or when the pressure is reduced at a constant temperature it will convert to a gas. This process of a liquid changing to a gas is called evaporation. The gas molecules have either very weak bonds or no bonds at all. This enables them to move freely and quickly. Hence, the gas will conform to the shape of its container and also will expand to fill the container. The transition from solid to liquid to gaseous states with the variation in external energy is schematically shown in Figure 7.1. 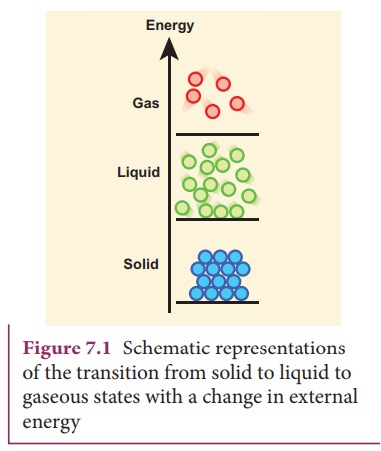 In the study of Newtonian mechanics (Volume 1), we assumed the objects to be either as point masses or perfect rigid bodies (collection of point masses). Both these are idealized models. In rigid bodies, changes in the shape of the bodies are so small that they are neglected. In real materials, when a force is applied on the objects, there could be some deformations due to the applied force. It is very important to know how materials behave when a deforming force is applied.