Different liquids do not mix together due to their physical properties such as density, surface tension force, etc. For example, water and kerosene do not mix together. Mercury does not wet the glass but water sticks to it. Water rises up to the leaves through the stem. They are mostly related to the free surfaces of liquids. Liquids have no definite shape but have a definite volume. Hence they acquire a free surface when poured into a container. Therefore, the surfaces have some additional energy, called as surface energy. The phenomenon behind the above fact is called surface tension. Laplace and Gauss developed the theory of surface and motion of a liquid under various situations.

Consider three different molecules A, B, and C in a given liquid as shown in Figure 7.20. Let a molecule ‘A’ be considered well inside the liquid within the sphere of influence. Since this molecule interacts with all other molecules in all directions, the net force experienced by A is zero. Now consider a molecule ‘B’ in which three-fourth lies below the liquid surface and one–fourth on the air. Since B has more molecules towards its lower side than the upper side, it experiences a net force in the downward direction. In a similar way, if another molecule ‘C’ is chosen on the liquid surface (i.e, upper half in air and lower half in liquid), it experiences a maximum downward force due to the availability of more number of liquid molecules on the lower part. Hence it is obvious that all molecules of the liquid that falls within the molecular range inside the liquid interact with the molecule and hence experience a downward force. 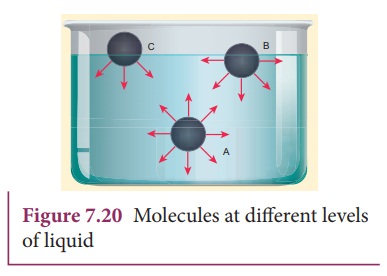 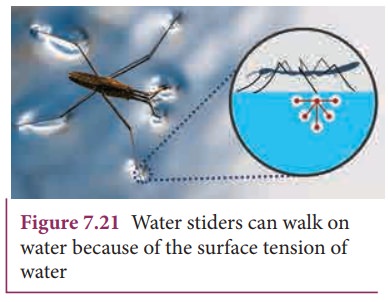 The hairs of the painting brush cling together when taken out of water. This is because the water films formed on them tends to contract to a minimum area (Figure 7.22). 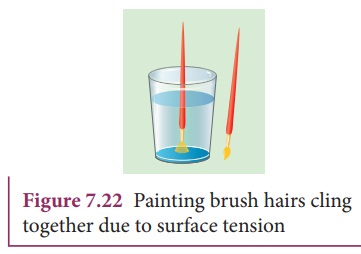 Take a greased needle of steel on a piece of blotting paper and place it gently over the water surface. Blotting paper soaks water and soon sinks down but the needle keeps floating. 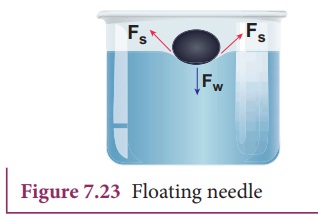 The floating needle causes a little depression; the forces F, due to the surface tension of the curved surface are inclined as shown in Figure 7.23. The vertical components of these two forces support the weight of the needle. Now add liquid soap to the water and stir it. We find that the needle sinks.

Take a plastic sheet and cut out a piece in the shape of a boat (Figure 7.24). A tapering and smooth front with a notch at the back is suggested. Put a piece of camphor into the notch of the boat. Gently release the boat on the surface of the water and we find that the boat is propelled forward when the camphor dissolves. The surface tension is lowered, as the camphor dissolves and produces a difference in surface tension in the water nearby the notch. This causes the water to flow away from the back of the boat, which moves the boat forward. 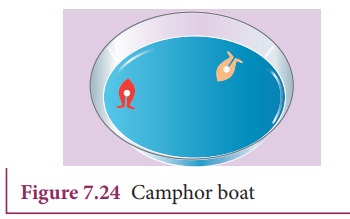